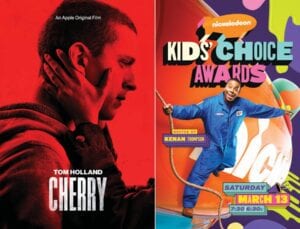 — Anthony and Joe Russo, the filmmaking brothers behind the “Avengers” movies, pivot in a different direction on “Cherry,” a new drama about PTSD and drug addiction. Tom Holland stars as a combat medic who suffers psychologically after returning from tours in Iraq and Afghanistan. A doctor prescribes him OxyContin, and his subsequent opioid addiction leads to a life of bank robbing. The film, based on Nico Walker’s best-selling semi-autobiographical novel, premieres Friday on Apple TV+. In their first directorial project since “Avengers: Endgame,” the Russos employ their blockbuster aesthetic on a stylized and self-indulgent American crime drama.

— After topping the charts with his brothers, Nick Jonas is going solo again. The pop star and “The Voice” mentor will release “Spaceman” on Friday. It is the 28-year-old’s fourth solo effort and features the singles “This Is Heaven” and “Spaceman,” which he recently performed on “Saturday Night Live.”

— Here’s an anniversary we all fervently hope is oneand done: that of the coronavirus pandemic. “Jimmy Kimmel Live!” is marking the dire milestone Thursday with a special episode titled the “Coronaversary Show.” Biden administration cabinet member Pete Buttigieg, who was a substitute host a year ago to the day, is back as a guest along with Joel McHale and musical guest Adam Duritz. The episode, billed as a commemoration of “our national incarceration,” airs at 11:35 p.m. EST on ABC.

— Grown-ups don’t have a lock on awards shows, as Nickelodeon’s Kids’ Choice Awards proves once again. The ceremony promises to be a virtual “wild ride” that, yes, will include slime. Among the creative solutions to pandemic-era safety: interactive video walls that bring celebrities and families at home together. Top nominees include Justin Bieber, who is scheduled to be among the performers; Ariana Grande; “Stranger Things” and “Wonder Woman 1984.” Kenan Thompson of “Saturday Night Live” will host the event airing 7:30 p.m. EST Saturday on channels including Nickelodeon and Nick Jr.).