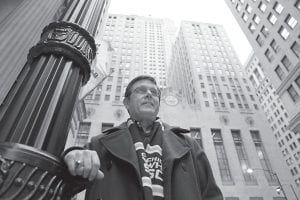 Sean Toohey, a grains broker at the Chicago Board of Trade who had hip replacement surgery last summer, walked home from work Monday. Routine hip replacement surgery on a healthy patient may cost as little as $11,000 — or up to nearly $126,000. Toohey said he has good health insurance that covered most of the costs, and it didn’t occur to him to ask about price beforehand. (AP Photo)

Want to know how much a hip replacement will cost? Many hospitals won’t be able to tell you, at least not right away — if at all. And if you shop around and find centers that can quote a price, the amounts could vary astronomically, a study found.

Routine hip replacement surgery on a healthy patient without insurance may cost as little as $11,000 — or up to nearly $126,000.

That’s what researchers found after calling hospitals in every state, 122 in all, asking what a healthy 62-year-old woman would have to pay to get an artifi- cial hip. Hospitals were told the made-up patient was the caller’s grandmother, had no insurance but could afford to pay out of pocket — that’s why knowing the cost information ahead of time was so important.

About 15 percent of hospitals did not provide any price estimate, even after a researcher called back as many as five times.

The researchers were able to obtain a complete price estimate including physician fees from close to half the hospitals. But in most cases, that took contacting the hospital and doctor separately.

“Our calls to hospitals were often greeted by uncertainty and confusion,” the researchers wrote. “We were frequently transferred between departments, asked to leave messages that were rarely returned, and told that prices could not be estimated without an office visit.”

Many hospitals “are just completely unprepared” for cost questions, said Jaime Rosenthal, a Washington University student who coauthored the report.

Most hospitals aren’t intentionally hiding costs, they’re just not used to patients asking. That’s particularly true for patients with health insurance who “don’t bother to ask because they know insurance will cover it,” said co-author Dr. Peter Cram, a researcher at the University of Iowa’s medical school.

Commenting on the study, American Hospital Association spokeswoman Marie Watteau said hospitals “have a uniform set of charges. Sharing meaningful information, however, is challenging because hospital care is unique and based on each individual patient’s needs.”

She said states and local hospital associations are the best source for pricing data, and that many states already require or encourage hospitals to report pricing information and make that data available to the public.

U.S. insurance companies typically negotiate to pay less than the billing price. Insured patients’ health plans determine what they pay, while uninsured patients may end up paying the full amount.

The study authors noted that Medicare and other large insurers frequently pay between $10,000 and $25,000 for hip replacement surgery.

Sean Toohey, a grains broker at the Chicago Board of Trade, had hip replacement surgery last summer at Loyola University Medical Center in Maywood, Ill. An old sports injury had worn out his left hip, causing “horrendous” pain on the job, where he’s on his feet all day filling orders.

Toohey, 54, said his health insurance covered most of the costs, and it didn’t occur to him to ask about price beforehand. He was back at work two weeks later and is pain free. That’s what matters most to him.

“I never really looked or paid attention” to the cost, he said.

He paid about $7,900, but wasn’t sure what the total bill amounted to.

The average charge for hip replacement surgery at Loyola is about $42,000, before the negotiated insurance rates. The most expensive items on a typical hip replacement bill include about $11,000 for the hip implant, said Richard Kudia, Loyola’s vice president of patient financial services

Kudia said some patients do ask in advance about costs of surgery and other medical procedures, and those questions require “a little bit of research” to come up with an average estimate. Costs vary from center to center because “there is no standard pricing among hospitals across the country. Each hospital develops its own pricing depending on its market,” he said.

An editorial accompanying the hip replacement study said “there is no justification” for the huge cost variation the researchers found.

A few online sites provide price comparisons for common medical procedures, but the editorial said that kind of information “is of almost no value” without information on hospital quality.

A proposed federal measure that would have required states to force hospitals to make their charges public failed to advance in Congress last year but could be revived this year, the editorial says.