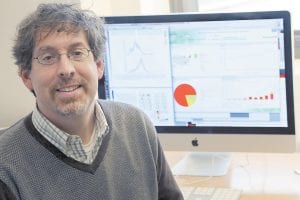 Jeffrey Shaman posed for a portrait in his office at Columbia University’s Department of Environmental Health Sciences in New York. In the study of New York City flu cases published recently in the Proceedings of the National Academy of Sciences, the authors said they could forecast, by up to seven weeks, the peak of flu season. (AP Photo)

That’s the kind of forecasting health scientists are trying to move toward, as they increasingly include weather data in their attempts to predict disease outbreaks.

In one recent study, two scientists reported they could predict — more than seven weeks in advance — when flu season was going to peak in New York City. Theirs was just the latest in a growing wave of computer models that factor in rainfall, temperature or other weather conditions to forecast disease.

Health officials are excited by this kind of work and the idea that it could be used to fine-tune vaccination campaigns or other disease prevention efforts.

At the same time, experts note that outbreaks are infl uenced as much, or more, by human behavior and other factors as by the weather. Some argue weather-based outbreak predictions still have a long way to go. And when government health officials warned in early December that flu season seemed to be off to an early start, they said there was no evidence it was driven by the weather.

This disease-forecasting concept is not new: Scientists have been working on mathematical models to predict outbreaks for decades and have long factored in the weather. They have known, for example, that temperature and rainfall affect the breeding of mosquitoes that carry malaria, West Nile virus and other dangerous diseases.

As a result, “in the last five years or so, there’s been quite an improvement and acceleration” in weatherfocused disease modeling, said Ira Longini, a University of Florida biostatistician who’s worked on outbreak prediction projects.

Some models have been labeled successes.

In the United States, researchers at Johns Hopkins University and the University of New Mexico tried to predict outbreaks of hantavirus in the late 1990s. They used rain and snow data and other information to study patterns of plant growth that attract rodents. People catch the disease from the droppings of infected rodents.

“ We predicted what would happen later that year,” said Gregory Glass, a Johns Hopkins researcher who worked on the project.

More recently, in east Africa, satellites have been used to predict rainfall by measuring sea-surface temperatures and cloud density. That’s been used to generate “risk maps” for Rift Valley fever — a virus that spreads from animals to people and in severe cases can cause blindness or death. Researchers have said the system in some cases has given two to six weeks advance warning.

Last year, other researchers using satellite data in east Africa said they found that a small change in average temperature was a warning sign cholera cases would double within four months.

“ We are getting very close to developing a viable forecasting system” against cholera that can help health officials in African countries ramp up emergency vaccinations and other efforts, said a statement by one of the authors, Rita Reyburn of the International Vaccine Institute in Seoul, South Korea.

Some diseases are hard to forecast, such as West Nile virus. Last year, the U.S. suffered one of its worst years since the virus arrived in 1999. There were more than 2,600 serious illnesses and nearly 240 deaths.

Officials said the mild winter, early spring and very hot summer helped spur mosquito breeding and the spread of the virus. But the danger wasn’t spread uniformly. In Texas, the Dallas area was particularly hard-hit, while other places, including some with similar weather patterns and the same type of mosquitoes, were not as affected.

“Why Dallas, and not areas with similar ecological conditions? We don’t really know,” said Roger Nasci of the Centers for Disease Control and Prevention. He is chief of the CDC branch that tracks insect-borne viruses.

Some think flu lends itself to outbreak forecasting — there’s already a predictability to the annual winter flu season. But that’s been tricky, too.

Seasonal flu reports come from doctors’ offices, but those show the disease when it’s already spreading. Some researchers have studied tweets on Twitter and searches on Google, but their work has offered a jump of only a week or two on traditional methods.

In the study of New York City flu cases published last month in the Proceedings of the National Academy of Sciences, the authors said they could forecast, by up to seven weeks, the peak of flu season.

They designed a model based on weather and flu data from past years, 2003- 09. In part, their design was based on earlier studies that found flu virus spreads better when the air is dry and turns colder. They made calculations based on humidity readings and on Google Flu Trends, which tracks how many people are searching each day for information on flu-related topics (often because they’re beginning to feel ill).

Using that model, they hope to try real-time predictions as early as next year, said Jeffrey Shaman of Columbia University, who led the work.