‘Wheel’ and ‘Jeopardy’ bigger than TV 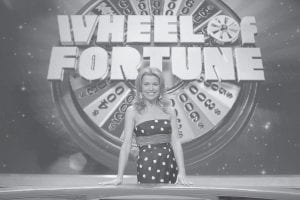 Vanna White, co-host of “Wheel of Fortune,” on the set in North Charleston, S.C. (AP Photo)

You take trivia answers that call for rapid-fire questions. You take a jumbo roulette wheel and the letters of the alphabet. What you’ve got are “Jeopardy!” and “Wheel of Fortune,” TV’s reigning syndicated shows for a quarter century.

But that’s only for starters. “Wheel” has rallied 4.6 million of its daily 10.4 million viewers for the online Wheel Watchers Club, which gives members a crack at winning a prize from each day’s telecast. There are versions of both “Wheel” and “Jeopardy!” for personal computers, with “Jeopardy!” available on the PlayStation online network. And you can play variations of both shows on your cell phone.

What’s next? Come January, any cell phone owner can compete in real time against the daily trio of on-air “Jeopardy!” contestants (as well as against others from the audience of 9.5 million) while viewing the broadcast.

“‘Wheel’ and ‘Jeopardy!’ have now transcended what we traditionally call programming,” says Harry Friedman, executive producer of both shows. “They are now a part of people’s lifestyle.”

They have certainly settled into the ethos. Is there anyone who’s never seen Pat Sajak selling vowels while his “Wheel” co-host Vanna White lights up the puzzle board? Or heard the scholarly purr of Alex Trebek reciting each “Jeopardy!” answer as if the facts were already second nature to him? Could there be anyone who doesn’t know that twinkly, sort of crazy-making tune for Final Jeopardy?

One key to their success: Neither show has a habit of calling attention to itself, with the notable exception of software engineer Ken Jennings’ 74-game winning streak on “Jeopardy!” in 2004, which not only made headlines and thrilled the public, but also threatened the steady-as-shegoes reliability that makes both shows so comfortable to watch.

Even if you haven’t tuned in since the Reagan administration (“Jeopardy!” is now celebrating its 25th season; “Wheel” premiered in syndication a year earlier, in 1983), you’re prepared for what you’ll see if you watch any day this week (check local listings).

Not that there haven’t been changes. Upgrading to high-definition television. Going on the road with more frequency and extravagance. Specially themed tournaments. Modifying the rules to energize the shows.

But Friedman speaks as the keeper of a sacred trust when he cites “our philosophy of not messing with the fundamental formats.”

“We keep the game the same,” he explains from his Los Angeles headquarters, “but we know we can change the show around it.”

He marvels at the shows’ compatibility. In most of their 200-plus markets, they air backto back, each having long ago proved itself as the ideal complement to the other.

“‘Wheel’ is a game, ‘Jeopardy!’ is a quiz, and each of them requires its own skill set,” Friedman says. “‘Wheel’ is best played by people who are avid readers and who like to do crossword puzzles, because they understand what words look like, how they appear to the eye.

“That requires a different skill than playing a game that’s knowledge-based, like ‘Jeopardy!'”

But as they carry on in TV tandem, each show has struck out for other media platforms.

In a few weeks, “Jeopardy!” will try to stake a claim in the high-tech frontier of TV interactivity. The newly introduced Jeopardy! Live will enable your cell phone to synch with “Jeopardy!” as it is telecast by your local TV station.

“For that one half-hour a night, the same questions that are being asked on TV will show up on your cell phone,” explains Eric Berger, Sony Pictures Television’s head of digital networks and mobile entertainment.

The phone will list three choices for the correct response. You must make your move faster than the on-air contestants.

Meanwhile, you’ll have the option of playing against other viewers by creating a buddy list. During each commercial break, your phone will display how you rank in the community you formed.

The cost for Jeopardy! Live will range between a monthly low of $2.99 and a purchase price maxing out at $7.99. It will be available from all major service providers, Berger says, and operate on most models.

With its January launch, Jeopardy! Live intends to bridge even not-so-Web-savvy “Jeopardy!” devotees with cell-phone gamers who may not include a TV quiz show in their media mix.

But that’s not all, declares Friedman, as his search continues for the next new twist.

“Fortunately, the way technology is going today, we never have to search too far, or wait very long,” he says, with a cautionary note about the games: “As they morph onto new platforms, we always have to maintain their integrity.”

On the Net: http:// www.wheeloffortune.com/