When Calipari came to Kentucky 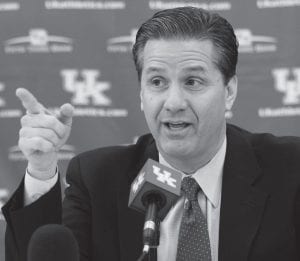 Earlier this week, UK agreed to a long-term contract with Calipari that will allow him to finish his career with the Wildcats. Calipari’s current deal was amended in March 2017 to run through the 2023-24 season, with a base annual salary of $8 million plus incentives. Men’s basketball spokesman Eric Lindsey confirmed this week via text to The Associated Press that the school reached a new deal with the Hall of Fame coach but did not provide details. The 60-year-old Calipari tweeted last month that his “plan and desire” was to retire at Kentucky. He is 305-71 in 10 seasons with Kentucky and won the 2012 NCAA championship in four Final Four appearances. (AP Photo/Ed Reinke)