When classes were held at Sycamore 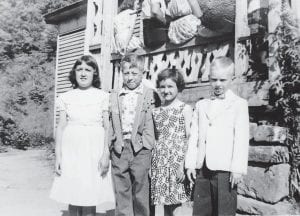 The entire 1955-56 third grade class on the last day of school at Sycamore School. Pictured from left are Gladys Pennington, Jimmy Harold Back, Linda Bryant, and Tony Blair.

John Hampton (1869–1944) was reared on Doty Creek near Jeremiah. His daughter, Vina Hampton Blair, said that he went to school in a log building near the mouth of Spring Branch just upriver from Hissy Caudill’s lake. At some point in time, this old building ceased to be used as a school, fell into disrepair, and was eventually torn down. Vina Blair told that the stone chimney of the school remained as a marker of its glory days until it, too, was torn down. She wasn’t sure when the chimney was torn down, but she thought that it was possibly in 1947 when the railroad was extended from Carbon Glow up Rockhouse Creek to Deane.

In the book Letcher County School Census 1904-1911 published by the Letcher County Historical and Genealogical Society, area children are listed as attending the Jeremiah School in 1911. Perhaps this was the school that John Hampton attended.

A new school building was built a short distance downstream, probably in the 1920s. This new school was named Sycamore, likely named for a large sycamore tree which stood on the edge of the campus.

The school building was “L” shaped with one smaller room built on the side of a larger room. This larger room became known as the “Big Room.” Three teachers were employed at the school in its earlier years. The upper grades, likely the sixth, seventh and eighth, were taught in the smaller room and the other grades divided between two teachers were taught in the Big Room. The division likely was premier, first and second in one class and the third, fourth and fifth in the other class. (Students and teachers of West Whitesburg Elementary in the 1970s are familiar with such an open classroom setting.) Eventually, sheets were hung from a wire stretched across the Big Room to separate the two classes. The sheets were slid to one side when the need arose. One such occasion was movies shown by one of Clara Caudill Blair’s brothers, who brought the film, a projector, and a bed sheet which he hung on the wall for the screen. The children were always fascinated with how the wheels on a moving wagon could occasionally appear to turn backwards in these old Western movies.

By the time of my student days there in the mid 1950s, folding doors suspended from a ceiling track had replaced the sheets. And like the sheets, the doors were slid aside for shows and other functions involving a large audience. I recall attending with my parents a performance of some well-known country singers/musicians. I don’t recall who the singers were, but I have often wondered if they were Hank Snow and/or Ernest Tubb. I believe it was these two country singers who owned the Whitesburg radio station for a time.

The doors were also slid back for “box suppers”. A box supper was a fund raiser in which the girls of the school each brought a box of prepared food. Each box was wrapped in crepe paper and decorated for attractiveness. After much socializing by those in attendance, the boxes were auctioned. The boy who was the high bidder of a box then ate supper with the girl who brought the box. The money from the auction was kept by the school for needed supplies and projects.

During my first two years at Sycamore, Mrs. Mable Nichols taught first, second and third in the small room. Mrs. Virgie Back taught fourth and fifth on one side of the folding doors in the Big Room and her husband Mr. Dawson Back taught sixth, seventh and eighth on the other side. During my third year, there were only two teachers. Mrs. Billie Jean Smith taught first through fourth and Mr. Vincent Caudill taught fifth through eighth. Perhaps decreasing enrollment was the cause in the drop from three teachers to two. Memory has it that the eighth grade had only five students: Angeletta Haynes, Earlene Bryant, Opal Pennington, Riley Eugene Caudill, and my sister Carol Blair. There were only four students in my third grade: Gladys Pennington, Linda Bryant, Jimmy Harold Back, and me. The following school year, Gladys and I transferred to Letcher Elementary on the Stuart Robinson Campus. As far as I know, our transfer left only two students in the fourth grade at Sycamore. Sycamore closed at the end of my fourth year of school.

Kenneth Blair, a Letcher County native, is a retired educator living in Lexington.

Tony Blair is a retired schoolteacher living at Jeremiah.