When hit comes to healthcare, Letcher Co. can teach others 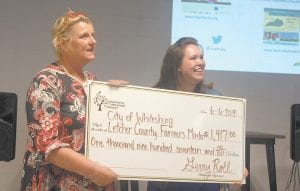 Valerie Horn (left) accepts a check for the City of Whitesburg Letcher County Farmers Market from Kristin Collins, associate executive director of The Foundation for Appalachian Kentucky. Collins presented the check at a community health forum organized by The Foundation for a Healthy Kentucky in Whitesburg. (Photo by Sam Adams)

Letcher County, healthcare leaders said last week, may not be perfect, but other places can learn from it.

The Foundation for a Healthy Kentucky had a forum on health issues in Whitesburg Thursday to learn what is good and what presents “opportunities” for improvement of health in Letcher County. It was the second of a series of forums the nonprofit plans to hold around Kentucky.

Foundation CEO Ben Chandler said Mountain Comprehensive Health Corporation, the Farmacy Program that partners MCHC with the Whitesburg Farmer’s Market to provide healthful food vouchers to patients, and the CANE Kitchen, which holds classes on how to cook healthier, are good examples of programs that have a beneficial effect on health here.

MCHC, based in Whitesburg, has 40,000 patients spread across southeastern Kentucky and nearly 400 employees. MCHC CEO Mike Caudill said the nonprofit company is focusing on prevention to improve the health of its patients, and has increased the percentage of patients receiving preventative examinations annually to 33 percent from 13 percent, with a goal of 50 percent. Any employee who gets an age-appropriate preventative exam gets a $1 an hour pay increase for the next year, and Caudill said the program has proved that prevention works.

“We have employees who had no idea they had high blood pressure, polyps, or were diabetic or prediabetic,” he said.

Joshua Ball, associate director of SOAR (Shaping Our Appalachian Region), said there have long been plans to transform Appalachia, but most of those plans have come from the outside. SOAR’s plan, he said, is to transform the region from within, and the things happening here are already doing that.

“What’s happening here in Letcher County is not, I don’t think, a problem to be solved,” he said. “It’s a solution that other communities in Appalachia need to discover.”

Chandler gave Valerie Horn the foundation’s Healthy Kentucky Policy Champion Award for being part of that solution. Horn is a community organizer and the driving force behind the Farmer’s Market and the CANE Kitchen, where the meeting last Thursday was held. Chandler said Horn received three nominations for the award because of her work with the Farmer’s Market, the Farmacy Program, a school backpack program and healthy cooking classes. The first year of the market, 2014, local farmers grossed $6,000, and in 2018 grossed $140,000. The number of farmers participating grew from six to 46.

The Farmacy Program began with 250 families in Letcher County, and has now expanded across the state, Chandler said.

While Chandler and the foundation celebrated wins in Letcher County, they now have their sights set on two areas where the county is lacking — the public smoking ordinance, and tobacco free school campuses. The foundation is calling for smoking to be banned in all public places, not just inside buildings, and for school campuses to ban all tobacco use. That includes “vaping.”

“We’re in an epidemic of tobacco use among teens with e-cigarette use,” said Bonnie Hackbarth, vice president for external affairs for the foundation.