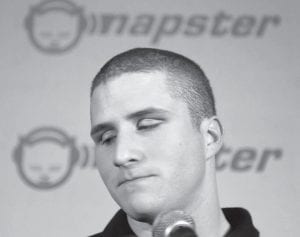 In the year 2000, a new company called Napster created something of a musicfan’s utopia — a world in which nearly every song ever recorded was instantly available on your home computer — for free. Even to some at the time, it sounded too good to be true, and in the end, it was. The fantasy world that Napster created came crashing down in 2001 in the face of multiple copyright-violation lawsuits. After a string of adverse legal decisions, Napster, Inc. began its death spiral on March 6, 2001, when it began complying with a Federal court order to block the transfer of copyrighted material over its peer-to-peer network.

Oh, but people enjoyed it while it lasted. At the peak of Napster’s popularity in late 2000 and early 2001, some 60 million users around the world were freely exchanging digital mp3 files with the help of the program developed by Northeastern University college student Shawn Fanning in the summer of 1999. Radiohead? Robert Johnson? The Runaways? Metallica? Nearly all of their music was right at your fingertips, and free for the taking. Which, of course, was a problem for the bands, like Metallica, which after discovering their song “I Disappear” circulating through Napster prior to its official release, filed suit against the company, alleging “vicarious copyright infringement” under the U.S. Digital Millennium Copyright Act of 1996. Hip-hop artist Dr. Dre soon did the same, but the case that eventually brought Napster down was the $20 billion infringement case filed by the Recording Industry Association of America (RIAA).

That case—A&M Records, Inc. v. Napster, Inc—wended its way through the courts over the course of 2000 and early 2001 before being decided in favor of the RIAA on February 12, 2001. Then, on March 5, 2001, District Court Judge Marilyn Patel issued a preliminary injunction ordering Napster to remove, within 72 hours, any songs named by the plaintiffs in a list of their copyrighted material on the Napster network. The following day, March 6, 2001, Napster, Inc. began the process of complying with Judge Patel’s order.