When preachers rode the ‘circuit’ 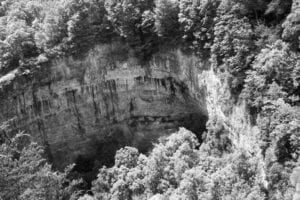 Natural Tunnel State Park is centered around the Natural Tunnel, a massive naturally formed cave that is so large it is used as a railroad tunnel. It is located in the Appalachian Mountains near Duffield in Scott County, Virginia, about 48 miles from Jenkins and some 63 miles from Cumberland Gap.

Four-time presidential candidate William Jennings Bryan called Natural Tunnel the Eighth Wonder of the World. The tunnel was thousands of years in the making as groundwater dissolved limestone and other material. Stock Creek took the path of least resistance through the cave on its way to the Clinch River. Natural Tunnel, which is now a state park, has attracted thousands upon thousands of visitors to the area for well over a century.

Circuit riding preachers became common in rural mountainous areas such as the Natural Tunnel area during the period when transportation relied heavily on horses and horse-drawn vehicles.

Francis Asbury is one of the most famous circuit-riders, having preached in a myriad of places including courthouses, public houses, tobacco houses, wherever a crowd assembled to hear him. He rode an average of 6,000 miles each year, preaching virtually every day and conducting meetings and conferences. Under his direction, the church grew from 1,200 to 214,000 members. Asbury said he relied on his horse so much his only spare time to study God’s word was while riding in the saddle.

John Brooks, another circuit riding preacher, recalled remaining in bed when he felt too ill to preach at a revival.

“Members of the flock came and earnestly prayed over me and I started feeling better immediately. Soon they had me rousted out of bed and we had a spirited revival,” Rev. John Brooks wrote. “I was revived as much as any other.”

“Every day I travelled I had to pass creeks or swamps and would get wet from head to feet,” another traveling preacher explained. “My horse’s legs are skinned and rough up to his hock joints and I have rheumatism in all my joints. What I have suffered in body and mind my pen is not able to communicate but this I can say, while my body is wet with water and chilled with cold, my soul is filled with Heavenly fire.”

The life expectancy of the circuit riders in pioneer times was short with nearly half dying by age 33. On one occasion near Natural Tunnel, the Rev. Neal feared he would be one of those early statistics.

He was returning by way of Natural Tunnel after preaching the prior day. The trail passed near the summit that had a breath-taking view of Natural Tunnel, from atop a vertical rockface nearly 450 feet high. The turn off the trail was covered by bushes and trees. The preacher rode his horse through the bushes when all at once he felt the horse sank down in front. The vegetation had prevented him from seeing the deep chasm immediately ahead. He was peering over the front of the horse where he discovered they were precariously on the edge of the abyss when, all at once, the horse slipped forward again.

The soil was damp from a rain that morning and the hooves of the horse kept slipping, putting man and animal in imminent danger of plunging to their deaths. The horse and the reverend trembled in fear. Rev. Neal was mortified by the likelihood of his life and that of his horse ending with a horrific fall. He said he felt the draw of the chasm like invisible hands pulling them down.

“Good Lord Jesus in Heaven, help get us out of this fix,” he prayed softly so as not to stress the horse any more than he was already. He drew back on the reins and began talking to the horse in a quiet reassuring tone.

“Easy Samson,” he whispered as the horse sank to his haunches, putting them at the edge of eternity. “I’m gonna slide off your back and then we’ll turn and carefully walk out of here.”

Rev. Neal slowly slipped off the saddle. He grabbed hold of a stout bush nearby, holding it with a firm clasp. He grabbed hold of one bush after another, then another as he pulled and crawled upward. The reins were in his free hand as he pulled gently while encouraging Samson. The horse turned his head toward the preacher as he struggled to his feet. He then slowly followed his owner to the summit and level ground.

Once there Samson stood panting. Rev. Neal lay prostrate giving thanks to God above. He would live for another day.

Jadon Gibson is a freelance writer from Harrogate, Tennessee. His stories are historic and nostalgic in nature. Thanks to Lincoln Memorial University, Alice Lloyd College and the Museum of Appalachia for their assistance.