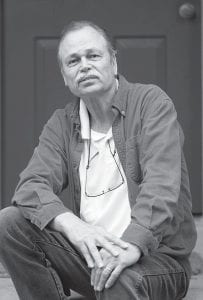 Terry Dyroff sat on the porch of his home in Maryland. Dyroff ’s PSA blood test led to a prostate biopsy that didn’t find cancer but gave him a life-threatening infection. (AP)

In the emergency room several days later, “I didn’t sit, I just laid on the floor, I felt so bad,” said Dyroff, 65, a retired professor from Silver Spring, Md. “I honestly thought I might be dying.”

Donald Weaver was a healthy 74-year-old Kansas farmer until doctors went looking for prostate cancer. A PSA test led to a biopsy and surgery, then a heart attack, organ failure and a coma. His grief-stricken wife took him off life support.

Since October 7, when a task force of independent scientists said routine PSA testing does more harm than good, urologists who make a living treating prostate cancer have rushed to defend the test, as have patients who believe it saved their lives.

Less visible are men who have been harmed by testing, as Dyroff and Weaver were. The harm is not so much from the test itself but from everything it triggers — biopsies that usually are false alarms, and treatments that leave many men incontinent or impotent for cancers that in most cases were not a threat.

Once a PSA test suggests a problem, many men can’t live with the worry that they might have cancer. And once cancer is found, most men feel they have to treat it, usually at the urging of their urologist.

“ There are many men who have had serious consequences from treatment. Those stories don’t get told and they are not uncommon,” said Dr. Len Lichtenfeld, deputy chief medical officer of the American Cancer Society, which thinks the task force reached “an appropriate conclusion” about the PSA test.

“I’m not going to criticize men who believe that their lives have been saved by this test,” because that’s what doctors have told them, Lichtenfeld said. “If you’re sitting there and you wet your pants three times a day, you’ve got to believe it’s worth it, that it saved your life.”

Many men who agree to a PSA test do not understand what it is. Some common misconceptions:

— It shows cancer. In fact, PSA is just a measure of inflammation, and it can be elevated for many reasons besides cancer: normal enlargement of the prostate with age, an infection, even recent sex, a strenuous bike ride or horseback riding.

— It’s been proven to save lives. Only two large, well- done studies have looked at this, the task force says. The American study found annual screening did not lower the chances of dying of prostate cancer. However, cancer fear is so great, and belief in the value of screening so ingrained, that half the men assigned to the group not offered PSA tests got one anyway. That made comparisons to the group given annual screening difficult. For that reason, some doctors don’t believe the study’s conclusion.

The other study, conducted in Europe, found a small benefit for certain age groups screened every two to seven years — not annually. However, one Swedish center had such rosy results that scientists think it may have biased the whole study. If that center is excluded, no benefit from the PSA test is seen.

— The task force’s stance goes against past advice. Routine PSA testing has been supported by some advocacy groups and by urologists, the doctors who do the tests and treatments. But it has not been pushed by major scientific groups, the American Cancer Society or the government.

— It finds cancer early so you’re more likely to survive. About 90 percent of prostate cancers found through screening are early stage. Most will grow so slowly they will never threaten a man’s life, but there’s no good way to tell which ones will. Research suggests that tumors causing symptoms are more likely to warrant treatment than those that are not. Also, finding aggressive prostate tumors early may not affect how lethal they prove to be; the PSA test may just let men learn of them sooner than they otherwise would.

The task force said that in the European study, the rate of overdiagnosis from PSA screening — finding cancers that do not need to be treated — was estimated to be as high as 50 percent. Based on that study, 1,410 men would have to be screened, and 48 patients would have to be treated, just to save one life from prostate cancer.

Yet the public perception is that if PSA testing finds a cancer early, it must be good.

“ Most people tend to think ‘if it may help, I’m all for it.’ But we don’t know if it will help,” said Siwek, the Georgetown doctor whose uncle died.

Once a PSA test suggests a problem, “it’s hard to stop the conveyor belt or the cascade effect” that leads to more testing and treatment, said Siwek, who also is editor of the journal American Family Physician. “The inclination is, ‘I’ve got to do something about it.’”

Dyroff, the retired professor, agreed to a biopsy after a blip in his PSA. Days later, he ran a high fever, felt weak and faint, and spent three days in the hospital fighting a bloodstream infection. A week later he relapsed and required a combination of intravenous antibiotics to finally recover.

A recent Johns Hopkins University study found surprisingly high rates of hospitalization after prostate biopsies and a 12-fold greater risk of death in those who develop infections.

Tony Masraff, a Houston restaurant owner, reluctantly agreed to a biopsy and then was diagnosed with prostate cancer in 1999. His urologist pushed surgery and balked when Masraff asked about other options such as radiation. After some research, Masraff decided just to monitor his tumor, and has seen his PSA rise very slowly over more than a decade.

Now 74, he hasn’t had treatment “and I never will,” he said. “I’m not concerned because I don’t want the debilitative effects — I don’t want to wear a diaper, and I like women.”

“There’s a huge number of people that are being operated on that don’t need treatment,” said Masraff, who formed a foundation for research into less invasive options.

The need to find a better screening tool is the real message from the task force, said Dr. Christopher Logothetis, prostate cancer research chief at the University of Texas M.D. Anderson Cancer Center in Houston. It may even be that there are better ways to use the PSA — employing it as a baseline test and tracking its rise over time — that might prove better than annual testing.

“If the debate gets reduced to ‘ there’s a right and a wrong,’ we will lose what we are being told here, which is to search for the path forward,” he said.

The cancer society’s Lichtenfeld agreed. “Maybe it’s time to listen to evidence instead of hope,” he wrote in his blog.