When should a child get cell phone? 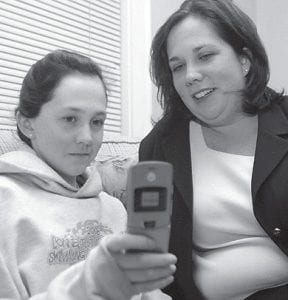 Meghan Mulvany, 12, left, and her mother, Kate Mulvany, look at Meghan’s cell phone at their home in Stamford, Conn. Kate says that although Meghan wanted the phone for social and status reasons, ultimately Kate got her the phone for safety reasons. (AP Photo)

When Amy Morris’ twin boys, then 11, went on an academic trip to Washington last year, she agreed to give them cell phones at the program’s request. But this summer she was dismayed to learn that girls at her 8-year-old daughter’s day camp were using cell phones they’d taken along in their backpacks.

“We were outraged,” says the Connecticut mother, who adds that the camp didn’t know. “These girls think it’s a cute game. But it’s inappropriate, and it’s unnecessary.”

It’s a signature parenting dilemma of the wireless age: Should kids have cell phones? And how old is old enough? It pits our understandable desire to keep tabs on our offspring — not to mention make them happy — against the instinctive feeling that it’s simply, well, wrong for youngsters to spend their time chatting and texting over the airwaves.

Now, there’s further ammunition for Morris and other reluctant parents like her to stand firm: The warning last week by the head of a prominent cancer research institute to his faculty and staff. Limit cell phone use, he said, because of the possible cancer risk — especially when it comes to children, whose brains are still developing.

The warning from Dr. Ronald B. Herberman, director of the University of Pittsburgh Cancer Institute, was based on early, unpublished data and came despite numerous studies that haven’t found a link between increased tumors and cell phone use. But it’s struck a nerve among parents who already have other reasons to resist their children’s entreaties.

“Now we hear about this possible medical risk,” says Marybeth Hicks, an author, columnist and mother of four. “I couldn’t possibly know if it’s real or not. But I know that it’s probably not necessary for most children to have a cell phone.”

To her, “it’s part of this whole rush to adulthood — Hello Kitty backpacks for third-graders have cell phone pockets in them! Marketers have skillfully created a groundswell of begging among kids — and we all know that begging can work.”

Hicks, whose book “Bringing Up Geeks: How to Protect Your Kid’s Childhood in a Grow-Up- Too-Fast World,” is about just such problems, has her own personal experience with persistent children.

“My 10-year-old daughter thinks she’s deprived,” says Hicks. “She’s been saying she’s the only one at school without a phone, and it’s actually getting to be true.” And her son, she says, was the only kid in his 8th-grade class without a phone. (He just got one, right before freshman year in high school.)

Hicks, who lives in East Lansing, Mich., is aware that some parents feel cell phones are an essential security tool for their kids. But, she says, “I always know where my kids are. A cell phone is a tool to negotiate the world once you have the responsibility to be out in the world on your own.”

Morris, of Weston, Conn., has decided that for her own kids, middle school is about the right time. “My boys are starting to walk home alone sometimes,” she says. “I want them to have a phone.” Being boys, though, they tend to forget the darned things all the time — especially in situations when they actually need them.

So far, Morris has avoided giving one to her younger child, she says, not an easy thing in a society where kids, especially girls, are so sensitive to social pressures. “I think a lot of parents in this country just give in,” she says. She’s especially concerned about the rampant text messaging among the younger set.

Statistics from the Pew Research Center show just how deeply ingrained in our daily lives cell phones have become: Fully 78 percent of all adults own them, including 86 percent of 18- 29 year-olds and 55 percent of Americans 65 and older. Pew doesn’t compile statistics on those under 18.

Text messaging, on the other hand, is the province of the young: 74 percent of 18-29 yearolds do it but only 6 percent of the 65-plus crowd.

It’s harder to gauge the tween set (usually defined as between 9 and 13) but it’s telling that in 2004, 21 percent of those aged 8 to 10 and 36 percent of the 11 to 14 group had phones, according to the Kaiser Family Foundation — a number sure to have ballooned since then.

Should the latest medical news cause huge concern among parents who HAVE given in? “If you’ve got good reasons for them to have it, I’d go ahead,” says Frank Barnes, a professor who chaired a recent report on the subject. However, he added, “they’ve probably got other things they should be doing.”

As for whether it’s a health hazard, Barnes, who teaches electrical and computer engineering at the University of Colorado at Boulder, said it’s more a question of “How do you deal with the unknown? We just don’t have the data.”

Ultimately, parents have to make their own rules — but that’s difficult when the social pressure is so strong, notes Lisa Bain, executive editor of Parenting magazine. “The age is creeping down,” she says. “Girls tend to get them younger. It’s become a status symbol — it makes them feel grown up.”

Bain can see both sides of the argument. Parents really need to set limits, she says, especially because so many phones these days are also cameras and have Web access. On the other hand, she said, the first time she dropped her middle-school aged daughter off at the mall, “I thought, thank God she has a cell phone.”

Of the recent medical warning, Bain says: “So many scary studies come out. This will give some parents second thoughts, and other parents ammunition. But for the vast majority, it’s not going to mean a lot.”

After all, says Bain, “It’s like standing up against a tidal wave.”