When should mammograms stop? 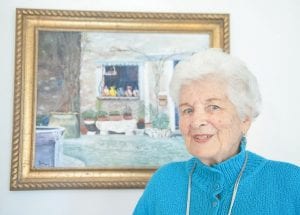 Marion Jones, who was treated for breast cancer, poses for picture beside her painting “Street in Provence” at her house in Silver Spring, Md. When to stop offering mammograms is an increasingly complex balancing act as older women are living even longer. (AP Photo)

Lost in the arguing over whether women should begin mammograms at age 40 or 50 or somewhere in between is the issue they’ll all eventually face: when to stop.

“There’s a point at which everybody begins to scratch their head and say how much longer do you have to keep doing this?” said American Cancer Society specialist Robert Smith.

It’s an increasingly complex balancing act as older women are living even longer. The risk of breast cancer rises with age. But so do the odds of other serious illnesses that may be more likely to kill in a senior’s remaining life span — or to make them less able to withstand the rigors of cancer treatment.

“If we pick up a cancer in someone who’s 75 and they die at 76 of something else, did it really matter? That’s really the question here,” said Dr. Susan Boolbol, breast surgery chief at Mount Sinai Beth Israel Medical Center in New York .

The cancer society’s advice: Women should continue mammograms as long as their overall health is good and they have a life expectancy of at least 10 more years. New guidelines issued by the U.S. Preventive Services Task Force said there’s not enough evidence to recommend for or against mammograms at age 75 and older, because that age group just hasn’t been studied enough to tell.

Getting such evidence is “critical, given the graying of America,” said Dr. Jeanne Mandelblatt, an expert on cancer and aging at Georgetown University.

Indeed, some in the 80-and-beyond crowd are as spry as 60-somethings. “People are taking better care of themselves,” said Yale University pathologist Dr. Fattaneh Tavassoli. “If we don’t start discussing it, it’s going to be more difficult to come up with management approaches for these patients.”

She recently reported that Yale’s medical center is diagnosing more breast cancer at 90 and older, averaging about eight diagnoses a year since 2000, compared with one a year during the 1990s. Many were diagnosed after the woman or doctor detected an abnormality, not from routine mammograms, Tavassoli said. But she’s asked if other hospitals see a similar trend and also wants to study what treatment they underwent.

Marion Jones was 84 and active when a mammogram spotted breast cancer. Surgeons removed a small tumor but during follow-up chemotherapy Jones developed pneumonia and blood clots. She needed a portable oxygen tank for a year until her lungs healed.

For Jones, mammograms were “just a habit” that she didn’t question when a new doctor said she was due, and she’s grateful her cancer was detected. But now 86 and healthy again, the Silver Spring, Maryland, woman recently told her oncologist that if her cancer ever returns, she doesn’t want chemo.

“She said, ‘Marion, at your age you probably won’t die of breast cancer anyway. It’ll be something else,’” Jones recalled. “That’s nice to hear.”

About 26 percent of breast cancer deaths each year are attributed to a diagnosis after age 74, according to the American Cancer Society.

“The question we have not really studied very carefully is what fraction of those deaths is truly avoidable,” Smith said.

Mammography does decline as women get older. About three-quarters of women age 50 to 74 have had a mammogram within two years, compared with 41 percent of the 85-plus group, according to 2013 government figures.

Mammograms bring pros and cons for the oldest women like they do for middle-aged ones, the possibility of reducing breast cancer death versus false alarms, unneeded biopsies and detection of a tumor so small or slow-growing that it never would have posed a threat.

Georgetown’s Mandelblatt used math models to analyze that balance, and estimated that healthy older women could benefit from regular screening through age 78 or 80. But among women who already had other moderate to severe illnesses, the harms of screening could outweigh benefits as early as 68, she said.

If cancer is found in the frail, Mount Sinai’s Boolbol notes there are less aggressive options that aim to stop a tumor’s growth rather than eradicate it.

She wants doctors and patients to have frank discussions about the woman’s overall health in deciding how long to continue mammograms.

“It really needs to be based on their health status, and not your age,” Boolbol said. “Because it’s not onesize fits-all.”