When the drugs stop working

Pressure rises to stop use of antibiotics in agriculture 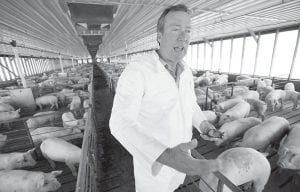 Dr. Craig Rowles, of Elite Pork Partnership, stands with hogs in one of his confinement buildings in Carroll, Iowa. Rowles gives his pigs virginiamycin, which he says has been used for decades and is not absorbed by the gut of the pig. He withdraws the drug three weeks before his hogs are sent for slaughter. He also monitors his pigs for signs of drug resistance to ensure they are getting the most effective doses. (AP Photo)

The mystery started the day farmer Russ Kremer got between a jealous boar and a sow in heat.

The boar gored Kremer in the knee with a razor-sharp tusk. The burly pig farmer shrugged it off, figuring: “You pour the blood out of your boot and go on.”

But Kremer’s red-hot leg ballooned to double its size. A strep infection spread, threatening his life and baffling doctors. Two months of multiple antibiotics did virtually nothing.

The answer was flowing in the veins of the boar. The animal had been fed low doses of penicillin, spawning a strain of strep that was resistant to other antibiotics. That drug-resistant germ passed to Kremer.

Like Kremer, more and more Americans — many of them living far from barns and pastures — are at risk from the widespread practice of feeding livestock antibiotics. These animals grow faster, but they can also develop drug-resistant infections that are passed on to people. The issue is now gaining attention because of interest from a new White House administration and a flurry of new research tying antibiotic use in animals to drug resistance in people.

Researchers say the overuse of antibiotics in humans and animals has led to a plague of drug-resistant infections that killed more than 65,000 people in the U.S. last year — more than prostate and breast cancer combined. And in a nation that used about 35 million pounds of antibiotics last year, 70 percent of the drugs — 28 million pounds — went to pigs, chickens and cows. Worldwide, it’s 50 percent.

The rise in the use of antibiotics is part of a growing problem of soaring drug resistance worldwide, The Associated Press found in a six-month look at the issue. As a result, killer diseases like malaria, tuberculosis and staph are resurging in new and more deadly forms.

In response, the pressure against the use of antibiotics in agriculture is rising. The World Health Organization concluded this year that surging antibiotic resistance is one of the leading threats to human health, and the White House last month said the problem is “urgent.”

“If we’re not careful with antibiotics and the programs to administer them, we’re going to be in a post antibiotic era,” said Dr. Thomas Frieden, who was tapped to lead the Centers for Disease Control and Prevention this year.

Farm groups and pharmaceutical companies argue that drugs keep animals healthy and meat costs low, and have defeated a series of proposed limits on their use.

America’s farmers give their pigs, cows and chickens about 8 percent more antibiotics each year, usually to heal lung, skin or blood infections. However, 13 percent of the antibiotics administered on farms last year were fed to healthy animals to make them grow faster. Antibiotics also save as much as 30 percent in feed costs among young swine, although the savings fade as pigs get older, according to a new USDA study.

However, these animals can develop germs that are immune to the antibiotics. The germs then rub into scratches on farmworkers’ arms, causing oozing infections. They blow into neighboring communities in dust clouds, run off into lakes and rivers during heavy rains, and are sliced into roasts, chops and hocks and sent to our dinner tables.

“Antibiotic-resistant microorganisms generated in the guts of pigs in the Iowa countryside don’t stay on the farm,” said Union of Concerned Scientists Food and Environment director Margaret Mellon.

More than 20 percent of all human cases of a deadly drug-resistant staph infection in the Netherlands could be traced to an animal strain, according to a study published online in a CDC journal. Federal food safety studies routinely find drug resistant bacteria in beef, chicken and pork sold in supermarkets, and 20 percent of people who get salmonella have a drug resistant strain, according to the CDC.

Here’s how it happens: In the early ’90s, farmers in several countries, including the U.S., started feeding animals fluoroquinolones, a family of antibiotics that includes drugs such as ciprofloxacin. In the following years, the once powerful antibiotic Cipro stopped working 80 percent of the time on some of the deadliest human infections it used to wipe out. Twelve years later, the New England Journal of Medicine published a study linking people infected with a Cipro-resistant bacteria to pork they had eaten.

Johns Hopkins University health sciences professor Ellen Silbergeld, who has reviewed every major study on this issue, said there’s no doubt drug use in farm animals is a “major driver of antimicrobial resistance worldwide.”

“We have data to show it’s in wastewaters and it goes to aquaculture and it goes here and there,” agreed Dr. Stuart Levy, an expert on antibiotic resistance at Tufts University in Boston. “Antibiotic use in animals impacts everything.”

It’s afternoon in one of his many rural Iowa pig barns, roaring with snorting and squealing pigs. Some snooze in corners, while others hustle toward their troughs, their slop laced with a steady supply of antibiotics.

“If there was some sort of crossover between the use of the antibiotics in animals and the antibiotics in humans, if there was in fact a real issue there, wouldn’t you think we would have seen it?” said Rowles, also a veterinarian who sells 150,000 hogs a year. “That’s what the science says to me.”

The modular modern barn, home to 1,000 pigs, is a hygienic place. Manure plops through slatted floorboards; an invisible funk steams back up. Rowles dons a sanitary white paper jumpsuit and slips plastic booties over his shoes; he’s anxious that his 100-pound pigs aren’t exposed to outside germs. A few sick swine are isolated, corralled in a pen near the entrance.

Antibiotics are a crucial part of Rowles’ business, speeding growth and warding off disease.

“Now the public doesn’t see that,” he said. “They’re only concerned about resistance, and they don’t care about economics because, ‘As long as I can buy a pork chop for a buck 69 a pound, I really don’t care.’ But we live in a world where you have to consider economics in the decision-making process of what we do.”

Rowles gives his pigs virginiamycin, which has been used in livestock for decades and is not absorbed by the gut. He withdraws the drug three weeks before his hogs are sent for slaughter. He also monitors his herd for signs of drug resistance to ensure they are getting the most effective doses.

“The one thing that the American public wants to know is: Is the product that I’m getting, is it safe to eat?” said Rowles, whose home freezer is full of his pork. “I’m telling you that the product that we produce today is the safest, most wholesome product that you could possibly get.”

Some U.S. lawmakers are fighting for a new law that would ban farmers like Rowles from feeding antibiotics to their animals unless they are sick.

“If you mixed an antibiotic in your child’s cereal, people would think you’re crazy,” said Rep. Louise M. Slaughter, D-N.Y.

Renewed pressure is on from Capitol Hill from Slaughter’s bill and new rules discussed in regulatory agencies. There is also pressure from trade issues: The European Union and other developed countries have adopted strong limits against antibiotics. Russia recently banned pork imports from two U.S. plants after detecting levels of tetracycline that the USDA said met American standards.

Farmers and drugmakers are battling back. Pharmaceutical companies have spent $135 million lobbying so far this year, and agribusiness companies another $70 million, on a handful of issues including fighting the proposed new limits. Opponents, many from farm states, say Slaughter’s law is misguided.

“Chaos will ensue,” said Kansas Republican Congressman Jerry Moran. “The cultivation of crops and the production of food animals is an immensely complex endeavor involving a vast range of processes. We raise a multitude of crops and livestock in numerous regions, using various production methods. Imagine if the government is allowed to dictate how all of that is done.”

The FDA says without new laws its options are limited. The agency approved antibiotic use in animals in 1951, before concerns about drug resistance were recognized. The only way to withdraw that approval is through a drug-by-drug process that can take years of study, review and comment.

In 1977 the agency proposed a ban on penicillin and tetracycline in animal feed, but it was defeated after criticism from interest groups.

There has been one ban: In 2000, for the first time, the FDA ordered the poultry medication Baytril off the market. Five years later, after a series of failed appeals, poultry farmers stopped using the drug.

In 2008 the FDA issued its second limit on an antibi- otic used in cows, pigs and chickens, citing “the importance of cephalosporin drugs for treating disease in humans.” But the Bush Administration — in an FDA note in the federal register — reversed that decision five days before it was going to take effect after receiving several hundred letters from drug companies and farm animal trade groups.

Laura Rogers, who directs the Pew Charitable Trusts Campaign on Human Health and Industrial Farming in Washington D.C., says the federal government, from Congress to the administration, has failed to protect the public.

“Because of poor regulations and oversight of drug use in industrial farm animals, consumers in the U.S. do not know what their food is treated with, or how often,” she said. “Nor is there a system in place to test meat for dangerous antibiotic resistant bacteria.”

Back in Missouri, farmer Kremer finally found an antibiotic that worked on his leg. After being released from the hospital, Kremer tested his pigs. The results showed they were resistant to all the same drugs he was.

“I was wearing a syringe, like a holster, like a gun, because my pigs were all sick,” he recalled. “I was really getting so sick and aggravated at what I was doing. I said, ‘This isn’t working.’”

Today, when Kremer steps out of his dusty and dented pickup truck and walks toward the open-air barn in the foothills of the Ozark Mountains, the animals come running. They snort and root at his kneehigh gum boots. There are no gates corralling the 180 pigs in this barn. He points to a mound of composting manure.

“There’s no antibiotics in there,” he says proudly.

Kremer sells about 1,200 pigs annually. And a year after “kicking the habit,” he says he saved about $16,000 in vet bills, vaccinations and antibiotics.

“I don’t know why it took me that long to wake up to the fact that what we were doing, it was not the right thing to do and that there were alternatives,” says Kremer, stooping to scratch a pig behind the ear. “We were just basically killing ourselves and society by doing this.”

Margie Mason is an AP medical writer who reported from Missouri and Iowa while on a fellowship from The Nieman Foundation at Harvard University.