When the world learned of Marilyn Monroe’s death 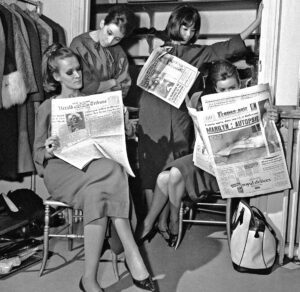 Citizens across the world reacted with shock and sadness on August 6, 1962, as they learned of the death of famous actress Marilyn Monroe (inset above), whose body was found at her home in Los Angeles the day before. According to History.com, Monroe “was discovered lying nude on her bed, face down, with a telephone in one hand. Empty bottles of pills, prescribed to treat her depression, were littered around the room. After a brief investigation, Los Angeles police concluded that her death was ‘caused by a self-administered overdose of sedative drugs and that the mode of death is probable suicide.’” In the photo above, taken inside the workshop of Paris fashion designer Pierre Cardin on August 6, four models are seen reading about the sudden and unexpected death of the film star born Norma Jeane Mortenson. The 36-year-old star of movies including Gentlemen Prefer Blondes (1953), Seven-Year Itch (1955), and Some Like It Hot (1959) had been under the care of a psychiatrist for depression at the time of her death. (AP Photo/Pierre Godot)