When to give up: Treatment or comfort for late-stage cancer? 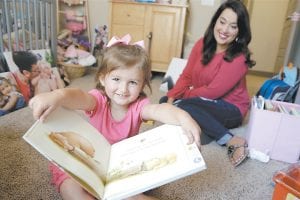 Amanda Evans-Clark reads a book with her daughter, Mira, 2, in Carmel, Ind. The book features voice recordings from her husband, Joe Clark. He died of advanced colon cancer at 31, after a year of chemotherapy. (AP Photo)

Two months before Joe Clark died of colon cancer at age 31, a doctor gently told him it was time to stop treatment.

He had suffered through more than a year of chemotherapy that produced painful sores in his mouth, last-ditch major abdominal surgery had left behind excruciating scar tissue, and hope had dried up. But the end of treatment had a surprise effect on Clark and his wife.

“It was a whole new way of thinking to wrap our minds around,” his widow, Amanda Evans-Clark recalled. No more “fight mode,” she said. “We finally felt like we were allowed to live.”

When to stop aggressive treatment is one of the most wrenching decisions in cancer care. Medical guidelines say dying cancer patients shouldn’t get harsh and painful treatment, but new research suggests it happens almost all of the time.

During their last month alive, three out four cancer patients younger than 65 got too-aggressive treatment and only a handful got comfort-based hospice care instead, according to the recent study.

There are many reasons why, but one of them is this, said University of Chicago palliative care specialist Dr. Monica Malec: “There’s nearly nothing harder than being faced with a patient who’s begging you not to give up on them.”

Dying patients and their families are sometimes in denial about their illness, and sometimes don’t understand the limitations of medical treatment, the researchers and other specialists say.

Those misunderstandings can often be avoided if doctors begin end-of-life conversations early in the process of treating patients whose cancers are likely to be deadly. But those talks often never happen, Malec said, or they don’t happen until the situation has progressed to crisis, because they’re just too difficult.

The new study is an analysis of health claims data involving more than 28,000 cancer patients who died between 2007 and 2014. Their end-of-life treatment included hospitalizations, chemotherapy and invasive procedures. Fewer than one in five patients received hospice care.

“There are hundreds if not thousands who undergo too much therapy and too much suffering for every one person that we have who ends up having a miracle,” said Dr. Otis Brawley, the American Cancer Society’s chief medical officer.

The study was presented earlier this week in Chicago at the American Society of Clinical Oncology’s annual meeting.

Dr. Ronald Chen, the study’s lead author and a cancer specialist at the University of North Carolina in Chapel Hill, said the decision is still a struggle, even when he knows hospice might be the right choice. “If I can offer chemotherapy or if I can offer radiation treatment, then I’m not giving up hope,” he said.

Wendy Sparks of Oklahoma City says watching her elderly mother and younger sister both die of cancer within the last three years changed her thoughts about end-of-life treatment.

Her mother stopped chemo after her doctor assured her that ending treatment didn’t mean giving up. But her sister, Nikki Stienman, kept up the treatment and suffered severe side effects from what her sister thinks was a needless final round of chemotherapy before she died at 38 of metastatic lung cancer in 2013.

“You’re not giving up if you don’t do treatment,” Sparks said. “You’re still fighting for your life, in a different way. You’re fighting to have good days.”

Dr. Andrew Epstein, a palliative care expert with the oncology society, said the new research, which echoes studies in older cancer patients, is important because less is known about end-of life care for younger patients.

Too few doctors know about hospice, which is among the best but most under-used resources, he said.

But abandoning treatment and seeking hospice care is sometimes seen as surrendering, especially with young patients, said American Cancer Society’s Brawley. “ When you’re dealing with young people, in their 40s, 50s, even 60s, it’s just so difficult to accept that this person is going to die,” he said.

Joe Clark, an Orlando, Florida businessman, was diagnosed in 2011, two days before his 28th birthday and two months before his wedding. Instead of a honeymoon, he had chemotherapy.

The treatments seemed to work, until a year later, when shortly after his wife learned she was pregnant, tests showed the cancer had spread aggressively.

“No one uses the words like, ‘incurable,’” Evans- Clark said. “We said what’s next, and I remember hearing, ‘you’re going to be on chemotherapy, and we said, ‘How long?’ And they said, ‘indefinitely.’” She recalls turning to look at her husband, “and he just broke down crying.”

The couple created a blog detailing their cancer ordeal. In an entry four months before he died, next to a photo of nine pill bottles on his night table, Clark wrote, “I don’t want to take any of them, but the doctor says I have to … This isn’t what they said was supposed to be! I’m supposed to enjoy all the small moments; all the ones that seem to matter the most, yet we let them slip from our attention so quickly. Because of the treatment plan, I can’t even do that.”

Evans-Clark remembers agonizing discussions with her husband about quantity versus quality of life. Major abdominal surgery failed to stop cancer’s spread. Chemo had caused mouth sores and there were problems with the ostomy bag that replaced his diseased intestines.

“I remember looking at him and he was so thin, and he was so depressed, and everything that made him a man … had been taken from him,” she said.

They moved to Indianapolis, where a doctor finally sat them down and said, “I don’t think this is worth it anymore.”

It was an epiphany.

Clark starting receiving comfort care at a hospice center that felt more like home than a hospital, where he could finally focus only on spending time with his wife and baby daughter.

“I was able to be his wife versus being the one pushing all the meds,” Evans- Clark said. “I was only given two more months with him but I would say they were some of the best months I had with him.”