Where beaten candidates used to go after elections 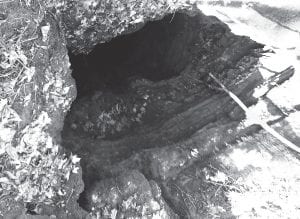 THE BULL HOLE AS SEEN FROM ABOVE — This view of the Bull Hole, located high on Pine Mountain near Mayking, was taken Sunday. The view from above the entrance to the locally famous location. (Photo by Todd Bentley)

“At this particular season of our political ‘whirligig,’ the Bull Hole is more or less talking about,” The Mountain Eagle’s founding editor and publisher, Nehemiah M. Webb, wrote in the paper’s March 9, 1909 edition. “To some it may be regarded as a kind of mythical ‘Salt River,’ up or down which all defeated candidates are set sailing immediately after an election. But with us such is not the case.”

“The Bull Hole, in fact, is a reality,” Webb continued. “It is a long, dark, deep fissure leading into the veritable bowels of the earth from which no living being could make its escape. Located high upon the broad breast of the Cumberland [now known as Pine Mountain], overlooking Whitesburg and surrounded on all sides by giant boulders and primeval solitudes while over its wide, thirsty mouth the mountain owl and the dingy bat flit in silence, it could be but a suitable habitation for the rejected and damned. No wonder, then, the poor candidate bestirs himself in the daytime and is haunted at night by bull mares and nightmares!”

The Bull Hole, located near the head of Cram Creek, is actually an opening that measures about 30 feet deep before expanding into an opening to caves in the Pine Mountain limestone. Since its first mention in this newspaper in March 1909, less than two years after The Eagle was founded, the Bull Hole and its relation to county elections was mentioned by Eagle staff writers and contributors in nearly every other local primary and general election through 1944.

Typical was this passage from the front page of the March 12, 1925 edition: “As the sun rises higher and the sap mounts up, candidates will become more and more plentiful. We look for the largest crop of these ever planted in any year. In the meantime, the Bull Hole will have to be enlarged.”

A little more than four months later, on July 23, 1925, this passage appeared on the front page as the county primary, then held in August, grew closer: “Nearer and nearer looms the Bull Hole upon the lonesome bosom of the Pine. It’s been hungry for victims now nigh unto four years, but its craving will be hushed about next Sunday and Monday week. The captain of that charnel abiding place of the dead or near dead, it is said, will not permit a sip of moonshine to enter its ravenous jaws. So, if anyone is accustomed to his ‘night before,’ it will be well to go shy of that awful hole.”

How did the Bull Hole get its name?

“Some 60 years ago a bull grazing around the side of the mountain vanished from sight,” said an article carried under the headline It Is So. “There was sign that he had fallen into this cavern and was perhaps in China, as some said. Ran Polly, a nearby citizen, ventured to go down in the hole and see. It was a great day. Hundreds of people were there for the occasion.

“A windlass was constructed, and with 500 feet of cable secured to a strong basket, Polly climbed into the basket and down, down he went. Many turned pale as though he was going to destruction.

“[Polly went] down and down until finally a signal. The windlass stopped. He had found the bull, cutting off one of [the bull’s] ears and giving the signal. Back up, up he came until he finally reached the top.

“Tons after tons of rock have been thrown into this ‘great opening’ by passersby on their way to High Rock. A few years ago by means of a ladder, Lee Short, who now lives nearby on the mountainside, ventured down into this cavernous hole and there was a bottom ledge, but he thinks the cavern opens sideways and perhaps into greater caverns.”

In his front-page column entitled “In the Good Old Days,” Eagle editor Webb remembered when “we took Ran Polly and Jim Williams down to the Bull Hole and left them there.”

“We did not mean to do it,” Webb wrote. “The truth is these men tied that cable around the dead bull’s neck and he was pulled out.

“People who witnessed the extracting of the big brute say that it reached the mouth of the entrance it was the longest animal they had ever seen. The reader can imagine a big bull tied by the head and horns dangling at the end of a rope.

“Polly and Williams were lifted from the hole also.”

The Bull Hole was also the subject of poetry in several earlier editions of The Mountain Eagle. On August 14, 1941, the following poem (author not credited) appeared after that month’s primary election:

While I tell you the news,

The doctor says I have a case of “Bull Hole Blues.”

Weak and worn, tired out too,

Until the people change their minds and it is us they choose,

We’ll just go along with the Bull Hole Blues.

I’ve run so far my limbs are sore.

A thousand miles, I guess or more.

But of you or me they no longer wrongly accuse,

Because we’ve just got the plain old Bull Hole Blues.

Well, so long, Comrade, be a good sport,

Next time we’ll get up early and get a good start.

We’ll work until it is they choose

And let the other fellow have

In the August 2, 1928 edition of The Eagle, then-editor J.L. Crawford (N.M. Webb had surrendered ownership at this time but would eventually regain it) used the Bull Hole to caution county residents to stop speaking so negatively about the county’s economy.

Those words were written a little more than 14 months before the Great Depression began on Black Friday, October 29, 1929.