Where does Wyoming coal go?

By PETER GARTRELL The Gillette News-Record 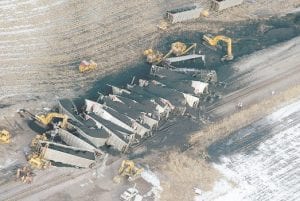 The village of Mayville, N.Y., is as close to a straight shot east from Gillette on Interstate 90 as a small town could hope to be.

On the banks of Lake Erie, just over the state line from Erie, Pa., and a little more than 1,500 highway miles from the plains of northeast Wyoming, Mayville is the county seat of Chautauqua County.

The county is a manufacturing community, first; an agricultural area, second; and, with Niagara Falls an easy day’s drive away, a tourist destination, third. Chautauqua County is also home to two coal-burning power plants, one of which burns coal from Wyoming mines.

Already deeply entrenched at Midwestern and Southeastern power plants in Kansas, Michigan, North Dakota, Georgia, Wyoming coal has expanded its geographic reach in recent years, even as environmental groups have pushed global warming concerns to the front of many political and regulatory agendas.

“(Western coal has) been moving in recent years,” said Douglas Biden, president of the Electric Power Generation Association, a Harrisburg, Pa., group that represents 13 power producers. “It’s been moving further and further east, predominantly because of the cost advantage (over Eastern coals).”

The plant began its conversion from Eastern bituminous to subbituminous coal in 2003, finishing its transition in spring 2005.

In almost the same period from 2002 to 2006 BNSF Railway has seen the number of states to which it delivers Powder River Basin coal increase from 28 to 38, according to slides from a recent investor presentation.

Coal and railroad executives like to point out that the United States is experiencing its largest power plant growth spurt in decades.

All told, there are 24 coal plants under construction and more with permits under review, said Frank Wood, executive vice president and chief financial officer of Foundation Coal Holdings, during the recent Bank of America 2007 Energy Conference in Key Biscayne, Fla.

The number is down from the 100 plants predicted as recently as 2005. But Wood, whose company owns Eagle Butte and Belle Ayr mines locally, said the current figures represent between 80 million to 95 million tons of extra coal demand annually.

“It’s not as big as it was once foreseen to be a couple of years ago, but nonetheless it’s proceeding at a fairly brisk pace,” he said.

Union Pacific and BNSF Railway, having just spent hundreds of millions of dollars expanding their coal networks coming out of Campbell County, expect the growth trend to continue.

A big reason is price Eastern coals are consistently three to five times higher than the product coming from Campbell County mines.

And as production prices increase in Southern Appalachia and more coal gets shipped overseas, a bigger hole is developing for Wyoming’s coal.

“As coal moves more into the export market and some of the domestic utilities can’t draw from the sources they’ve historically drawn from, (Powder River Basin) tends to be the first coal that fills in those gaps particularly in the Southeast and moving further into the middle part of the country,” Wood said.

“We have seen PRB coal growing since at least 2000. Year-over-year it’s been pretty steady,” said Robin Chapman, a railroad spokesman. “It costs less than Eastern coal and it’s lower sulfur coal so utilities that now aren’t equipped with scrubbers can use that and stay in compliance.”

But Biden believes the lowsulfur aspect of Wyoming coal may play less and less of an advantage as new federal regulations, known as the clean air interstate rule, force some Eastern power producers to build pollution controls into their new and existing plants.

The tighter rules on sulfur dioxide and nitrogen oxide, both byproducts of coal, are set to take effect beginning in 2010 and 2009, respectively. Further tightening of the rules on both gases, which only govern Eastern and Midwestern states, are set for 2015.

The rules, combined with the expiration of many Western rail contracts and along with them, bottom-basement transportation prices, may make plants with new pollution controls to rethink their options.

“I think it will be more difficult for PRB coal to make inroads into Eastern markets as more plants add scrubbers,” Biden said.

Norfolk Southern has a similar outlook.

“If more plants install scrubbers, that could change the picture,” Chapman said. “(And) we do see utilities switching to scrubbers a significant percentage across the board.”

Southeast of Mayville, and 30 miles from the Dunkirk plant, the Jamestown Board of Public Utilities already has made its decision.

The board is now seeking permits to build a new type of power plant, a cleaner burning model known as a circulating, fluidized bed unit to replace its current one, which is more than a half century old.

And while the Jamestown plant is small – about 50 megawatts to Dunkirk’s 520 – the board already has decided it will use eastern bituminous coal, according to David Gustafson, electric and gas resource manager for the plant.