Which of us gets vaccine 1st? 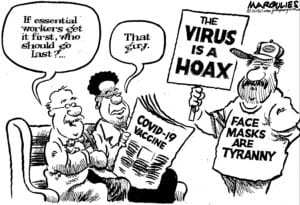 None of the three vaccines has been approved by the U.S. Food and Drug Administration (FDA)yet, and they are only now beginning to be shipped to warehouses in the U.S. When shipped to their final destinations, there will be about a tenth of the number of doses promised by the White House, The Washington Post reported this week.

The doses that are available will be given to nursing home patients, medical personnel and first responders before the general public.

The Kentucky River District Health Department has not yet received a schedule of when the vaccines will arrive here.

“We do not know specifics yet, we only know generalities,” District Director Scott Lockard said. “It’s going to be targeted first for our long-term care facilities, residents and nurses, then to the hospital systems, and then the first responders,” Lockard said.

Pikeville Medical Center will likely be the first hospital in the area to receive the vaccine, but with an additional 100,000 Moderna vaccine doses on the way before the end of the month, Lockard said he expects the plan to be revised to include Appalachian Regional Healthcare hospitals.

“The hospitals will act as hubs for the healthcare system,” Lockard said, distributing the vaccine to clinics and doctors’ offices in their immediate areas. Lockard said the health department will be giving vaccines to first responders, including emergency medical services (EMS), police and firefighters.

The Kentucky Board of Emergency Medical Services (KBEMS) is encouraging EMS personnel to apply for the vaccination by 4 p.m. on December 10 to ensure they get it.

“If you do not complete this application, it is possible that you will encounter considerable delays in receiving the COVID-19 vaccination should you change your mind in the future,” an email sent from KBEMS to certified and licensed emergency responders and provided to The Mountain Eagle says.

Gov. Andy Beshear said on Monday that he believes there will be up to five shipments of two vaccines in December, but “there is not enough to go around to everybody at the same time.”

Pfizer/Biontech has allocated a little more than 38,000 doses of the virus to Kentucky for the week of Dec. 13-19. The vaccine requires two doses about three weeks apart, and the second dose is supposed to be shipped three weeks later.

Moderna has allocated 76,700 doses the week of December 20-26, and another 33,800 between De- cember 27 and the 31st. That virus requires two doses four weeks apart, and the second dose will be shipped four weeks after the first, Beshear said, quoting from federal government reports.

Beshear said he believes the state will receive two more shipments from Pfizer, possibly before the end of the month, but the federal government has not given the state dates for those shipments.

The New York Times last week published an online tool in cooperation with the Surgo Foundation and Ariadne Labs using their vaccine planning tool and available health statistics that allow people to estimate where they will be in line to receive the immunization. According to that tool, a 22-year-old with no underlying health conditions in Letcher County would be behind 2.3 million other Kentuckians, and behind 13,500 others in the county.

The first dose of the Pfizer/ Biontech vaccine ever given outside of clinical trials was given to a 90-year-old grandmother in England on Tuesday. That vaccine is expected to be approved late this week by the FDA, and shipments will be begin shortly after that.

Experts believe will be at least the middle of 2021 before most Americans have received the vaccine.