Which UK players stay? Which go? 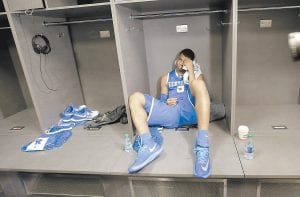 Kentucky guard Andrew Harrison sat dejectedly in the locker room after his team’s 60-54 loss to Connecticut Monday in Arlington, Texas. Harrison is one of seven UK players expected to at least consider leaving UK to play professionally in the NBA. (AP Photo/Eric Gay)

Kentucky’s talented freshmen shed a shaky regular season and then showed why the Wildcats were picked No. 1 in the preseason with an impressive run to the NCAA championship game.

After falling short in a 60-54 loss to Connecticut, the annual question is which Kentucky player(s) will leave for the NBA, including John Calipari.

The fifth-year Kentucky coach is used to inquiries, but former Kentucky player Rex Chapman turned up the heat Monday by tweeting that Calipari coaching the Los Angeles Lakers was a “done deal.” While Calipari said later that he was happy with the Wildcats and planned to be back at Kentucky, he didn’t completely dismiss the scenario.

It wouldn’t be a surprise if Kentucky (29-11) loses forward Julius Randle. Several of his young teammates also are going to mull over their pro prospects.

But the tweet by Chapman, a former Wildcat, shifted some of the scrutiny toward Calipari, whose name frequently pops up about NBA jobs. He has laughed off many of them, but the newest seemed to strike a nerve.

Calipari didn’t address the NBA issue during Tuesday’s brief celebration before 3,500 at Rupp Arena in which the runner-up banner hung from the rafters. But he responded to Chapman’s initial comment after the game by saying, “The Lakers have a basketball coach. Kentucky has a basketball coach. I got the best job in the country. I’m not even going to dignify that stuff.”

Chapman’s tweet came just before the Wildcats faced the Huskies in pursuit of their ninth national title, and some Kentucky fans blamed him Tuesday on radio talk shows for creating a distrac- tion. Chapman backtracked on his comment Tuesday, saying in a radio interview that he believed Calipari would stay at Kentucky.

As for the players, the question is which of Kentucky’s six highschool All-American recruits will pursue their pro dreams after raising their stock in the tournament.

Randle appears to be the biggest NBA lock after arriving with projections of being a lottery pick. He boosted his profile by averaging 15 points and 10.4 rebounds, and posting 24 double-doubles despite being double- and triple-teamed.

Kentucky’s starting backcourt might also enter the draft pool following their performances in the NCAA tournament.

Twins Aaron Harrison — whose back- to- back, game- winning 3-pointers helped put the Wildcats into the final — and Andrew have been listed on some draft boards as first- or second-round picks. James Young is another possibility because of his outside shooting; he led Kentucky with 20 points against UConn.

Sophomore seven-footer Willie Cauley-Stein — who was sidelined for the final three games by an ankle injury — and forward Alex Poythress are also considered prospects. Freshmen post players Dakari Johnson and Marcus Lee are expected back.

With all of his players, Calipari said he will discuss their futures soon enough.

“Now that the season’s over, it is about the players,” the coach said. “They sacrificed. They surrendered to each other now, for our team and our program and our school.

“We’ll sit down with each of them and they will make decisions for themselves.”

Whatever the Wildcats decide, they can look back on an intriguing season in which they began No. 1 with projections of even going unbeaten before enduring a series of growing pains. In fact, a stretch-run swoon had knocked Kentucky out of the Top 25 just before the Southeastern Confer- ence tournament, when the light went on and it began chasing a lofty goal of winning a second title in three years.

After a one-point loss to eventual NCAA tournament top seed Florida in the SEC championship, the Wildcats caught fire in the tournament behind Aaron Harrison’s clutch NBA-range 3-pointers that beat defending champion Louisville, Michigan and Wisconsin.

Ill-timed turnovers and 11 missed free throws ultimately cost Kentucky against UConn, but the Wildcats took solace in maturing enough to get to a place that seemed unlikely a month ago. It remains to be seen whether players or Calipari stick around for another shot with another highly regarded group of recruits, but they’re happy to have at least fulfilled some of those expectations.

“We have been through a lot this season,” Randle said afterward. “How we kept fighting and were able to make this run just says a lot about our guys. I just hate that it ended like this.”