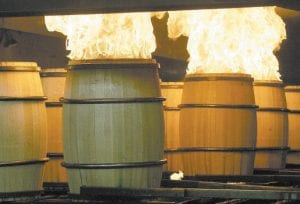 Flames shot through the inside of oak whiskey barrels as they were being charred at the Blue Grass Cooperage in Louisville in May. (AP Photo/Ed Reinke)

Not even devoted fans of Jack Daniel’s would recognize the clear liquid poured into barrels at the popular whiskey’s Tennessee distillery.

At that point, the potent brew looks more like “white lightning” than the world’s best-selling whiskey. It’s while maturing for years inside new charred white oak barrels that the whiskey acquires its amber color, plus most of its taste and aroma.

Louisville-based Brown- Forman Corp. pays close attention to producing the barrels. Its barrel plant, among the largest in the country, mixes tradition with a mechanized process to keep pace with demand for Jack Daniel’s and its Kentucky bourbon whiskey brands.

“A barrel is a very important part of the recipe of the finished product,” said Jerry Nalley, production manager at Blue Grass Cooperage.

Each bourbon maker has its own barrel specifications, so having its own cooperage allows Brown-Forman to make sure its barrels are tailored to its needs, Brown-Forman master distiller Chris Morris said.

The Louisville plant has a long history. It started as a furniture factory in the early 1920s, then turned into a munitions plant that made rifle stocks for the British. Once the United States entered World War II, the plant produced plywood used in bombers and fighter planes. Brown- Forman purchased the plant after the war and converted it to make barrels for its whiskeys.

Each week, 191 production workers make 10,000 to 11,000 barrels, each holding 53 gallons – amounting to anywhere from 240 to 280 bottles of whiskey. Huge columns of oak strips are stacked in pallets outside the plant. Inside, chugging machinery noisily shapes the wood.

Some 90 percent of barrels are filled with Jack Daniel’s, reflecting the brand’s robust market share. Case sales of Jack Daniel’s Tennessee Whiskey rose 6.6 percent last year to 8.9 million cases, and the brand is sold in 135 countries. The rest of the barrels will hold Brown-Forman’s Old Forester and Woodford Reserve bourbons. Case sales for Woodford Reserve, the company’s premium, smallbatch bourbon, reached 100,000 last year, up 23 percent over 2005.

“We rely completely on the barrel for the color and a lot of the flavor,” said Jimmy Bedford, master distiller for Jack Daniel’s, which is produced in Lynchburg, Tenn.

During the summer heat, the whiskey expands into the wood. When temperatures turn colder, the liquor comes back out of the wood, each time bringing with it more color and flavor.

A master distiller decides when whiskey reaches maturity, then mingles liquor from different barrels for the desired taste. The exception is for premium single-barrel brands.

Unlike Brown-Forman, other whiskey producers buy their barrels rather than make their own. Brown-Forman won’t disclose how much a barrel costs for proprietary purposes. Those master distillers are just as picky about the barrels used to age their handiwork.

“The bottom line is, if you don’t have a good barrel, the product that comes out of it is not going to be good,” said Parker Beam, co-master distiller at Heaven Hill Distilleries, which has several barrel suppliers for its bourbons, which include Evan Williams and Elijah Craig brands.

Beam, a descendant of Jim Beam, wants a certain moisture content in the wood. If it’s too high, “the wood is going to be too porous and the whiskey doesn’t age good,” he said.

Even with the best-made barrels, a portion of the bourbon is lost to evaporation during aging – which insiders refer to as the “angels share.” Bourbon makers want sound barrels to minimize that loss, said Jerry Dalton, master distiller at Jim Beam, which buys its barrels.

“We don’t want to make the angels too happy,” he said.

Morris said having access to freshly made barrels is important in producing the company’s bourbons.

Morris, who is based in Louisville, will visit the barrel plant occasionally – a recognition of the partnership between distiller and barrel makers.

“He knows what he needs out of our wood to make his whiskey,” Nalley said. “And that’s our job, to give him what he needs.”

To keep pace with demand, the plant uses 24 million to 26 million board feet in a year. Because of strict specifications, demand for barrels is constant. Jack Daniel’s and Kentucky bourbons are stored in new charred oak barrels, as required by law.

Reusing a barrel, Bedford said, would be “kind of like using a coffee bag or a tea bag. You just wouldn’t get the same effect the second time around.”

Used barrels still have value. The company sells them to other spirits makers to store rum, tequila, scotch, Irish whiskey and other liquors.

The Brown-Forman barrel plant is a hive of activity. Conveyer belts move wood strips around for processing. In the char tunnel, flames shoot upward as the inside of each barrel is blackened. The outside of the barrel retains its light oak color.

Other tasks remain hands on. Melissa Kappel has one of those jobs. The petite 21-year-old is a barrel raiser – an old-fashioned job that requires piecing together a few dozen strips of wood to form each barrel. The job is one of the highest paid and most grueling.

Each barrel raiser is expected to assemble 268 barrels per shift. She and her male colleagues are constantly in motion, reaching for wood strips and putting them in place.

The pace is fast. Methodically, Kappel picks out strips with differing widths to form a barrel. She finishes by wrapping a metal ring around each barrel.

“It was kind of hard at first,” she said during a break. “The hardest part was being able to get the rhythm and getting faster at it.”

There were plenty of doubters when she started out 2 1/2 years ago.

“Everybody told me, `Just wait until you go back there raising barrels, you’re not going to be able to do it'” said Kappel, who lives in Elizabethtown. “I just wanted to show them that I could do it, and I went back there and did it.”

A scoreboard keeps track of each worker’s pace. On a recent shift, Kappel was in the middle of the pack among five barrel raisers – behind two men and ahead of two others.

“At first, a bunch of them (male co-workers) would jump in and try to help me,” she said. “But now they won’t. Now they don’t want to do anything for me, nothing.”

Kappel is keeping alive a tradition as rich as the whiskey her barrels will hold.

“The final product is still the same,” Nalley said of the plant’s handiwork. “A barrel today would look like a barrel 200 years ago.”