Whitaker has been working with public for 50 years 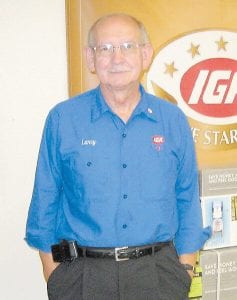 RETIRING AFTER 50 YEARS – Letcher County grocer Larry Whitaker was photographed last week during one of his final days as manager of Food World in Whitesburg.

Larry Whitaker helped stock the shelves of Food World in Whitesburg for the first time in the winter of 1984, just before its grand opening. On Sunday, he took inventory for the final time as the store’s manager.

Whitaker is retiring after opening the store every morning at 7 a.m. for nearly 25 years. No longer can Whitaker be found in the store on weekdays until 4 p.m., or on Sundays until left to go to church around 10 a.m.

“It will sure give me time to do things differently,” Whitaker said of his retirement from the store, located in the Whitesburg Plaza Shopping Center. “Life is so uncertain that if you have things you want to do, you better go and do them.”

Whitaker said he will spend some of his time doing woodwork and said he might even learn to play golf.

He purchased a log home package and would like to have it built somewhere. He said he would do the finish work inside the log home himself.

Whitaker began his long journey in the grocery business in 1958 at the Hazard A&P grocery store when he was 16 years old.

“I started out like all young people do – bagging groceries, cleaning the floors and stocking shelves,” said Whitaker.

After working six years at the Hazard store, he went to the Irvine A&P to fill in for a meat cutter.

“I went down there for two weeks and ended up staying 11 years,” said Whitaker.

In 1976 Whitaker became the store manager at the Hazard A&P store and stayed in Hazard until he was hired by the Laurel Grocery Company to manage Food World in 1984.

“I actually built this store from the floor up and it will be sad quitting,” he said.

Whitaker said the first time he saw the Whitesburg Food World building it was raining and there were no sidewalks, just gravel on the lot.

“The front of the building didn’t have glass in the windows,” said Whitaker. “Inside there was nothing on the walls or overhead and they were pouring concrete.”

Whitaker remembered that Ellis Morgan, head of the old Whitesburg Coca-Cola Bottling Plant, donated a mini pickup truck to give away during the store’s grand opening. Customers tried to guess how many empty Coke cans were in the back of the truck.

“We got to see the first customers,” he said.

Whitaker said the owners of the Laurel Grocery Company are some of the finest people for whom he has ever worked.

“I worked for them for 25 years and never have they failed to do what they have told me they were going to do,” said Whitaker. “If the store had been 100 percent mine, I couldn’t have had any more control over it. That’s how much authority the gentlemen gave me.”

He said over the years he has seen a lot of teenagers and young adults come and go.

“I try to always keep high school and college students employed at the store,” he said. “(The grocery store) is a place where they get a good education with the public and help them figure out what they want to do with their lives. It teaches them to be responsible.”

Whitaker said some employees remained with him for more than 20 years.

He said the grocery business has changed over the years, mostly because of advances in technology.

“Everything was priced by hand,” said Whitaker. “Now everything is scanned. Now just about everything is done on computers – ordering, tracking our sales.”

“Prices have tripled and quadrupled,” he said.

Whitaker said rising fuel service charges are another change from earlier days and add about $150 to normal delivery fees.

“The customer is the one who eventually pays for all of it,” he said.

During Whitaker’s 50 years of working in the grocery store business, he said one thing has always stayed the same.

“The customers have stayed the same,” he said. “They are always looking for a clean, friendly place to shop. I always tell my employees we may not always be the cheapest store in town but we can be the friendliest and the cleanest. I would rather shop at a store where people acknowledge me.”

Whitaker said working in a grocery store is never boring because no two days are the same.

“The food industry is a good industry to plan a career in if you like to work with the public,” he said.

Twelve years ago Whitaker bought the Food World at Neon. His two sons co-manage the store and their wives work there as well.

“Stephen went to Cumberland College and seminary in Texas, and whenever he came back here I offered him a job,” said Whitaker. “David was selling cars for Cardinal Chevrolet in Hazard. I needed someone I could put in charge who has the same interests I have for the store.”

Whitaker said his sons have tripled sales at the store since he bought it.

Now that Whitaker has retired from his duties at the Whitesburg store, he will have an office at his Neon store.

“When I get a hankering to work for a grocery store, I have one,” said Whitaker. “I will do mostly recordkeeping, planning sales programs and activities inside the store. We want to involve the community more and make it a community store.”

Whitaker is curious to see what it will be like working so closely with his sons.

“Family – too many times we forget that is the reason we work,” he said.

Whitaker said he won’t be afraid to speak up if needed.

“If I see them doing something I think they shouldn’t, I will tell them,” said Whitaker. “I have more experience than either of them. Hopefully I can tell them a thing or two that will help them.”