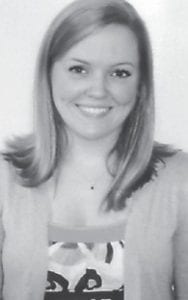 Sydney Whitaker is the winner of the spring 2010 Meryl Brown Scholarship given by the Whitesburg Rotary Club. She is a daughter of Marion and Twila Whitaker of Cornettsville, and was graduated from Letcher County Central High School in 2006, where she was 11th in her class with a 4.04 grade point average.

While in high school, she was named to the Honor Roll all four years and to Who’s Who Among American High School Students, and was co-captain of the volleyball team.

Whitaker attends Alice Lloyd College where she is a senior with a double major in history (pre-law) and social science with a minor in English. While at ALC, she has been vice-president of the Student Government Association, a yearbook editor, a resident advisor, a member of the Alpha Chi Scholastic Society and the IMPACT Club, and co-captain of the volleyball team. She has also been named to the President’s List and Who’s Who Among Students in American Colleges and Universities.

After graduating from college, she plans to attend law school and says she would like to return to her community to practice law and create a community civic center.