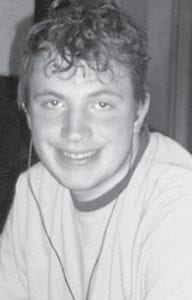 Stephen West celebrated his 18th birthday on June 8. He is the son of Ben and Sonja West. His grandparents are Joy Watts and the late Green Watts, and the late Anna Lorene and George Gordon West.

Hello all! I hope this finds each of you doing well and that everyone had a nice Father’s Day. We did. Michael and Dalton went to the movies to watch Superman while Bailey went with me to Mom and Dad’s house. I fixed supper and made Dad a butterscotch pie because I know he loves them. We just pretended that he isn’t a diabetic, at least for Father’s Day.

Dad and Mom, Allen and Sylvania Whitaker, spent the weekend at the cabin in Jabez at Somerset with Opal Jent and Austin Whitaker. Johnny and Tammy Whitaker were also there for the weekend. They enjoyed fishing and visiting with Rulah Whitaker and his wife, Peggy.

All of Gert and Luther Combs’s kids, grandkids, and great-grandkids were in Somerset for Father’s Day and really enjoyed themselves.

Mom and Opal went to Monticello and visited with Joy Faye Blair for a little while. Then they all went to the cemetery where David Allen is buried. Mom had brought some flowers to put on his grave. 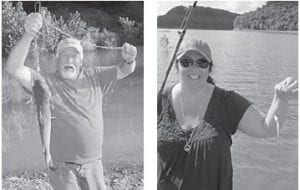 Johnny and Tammy Whitaker are pictured with their weekend catch at Lake Cumberland near Jabez. He caught a 21-inch catfish, the biggest of the day, and she proudly shows off her prize-winning catch as well.

Eleven years ago, Mom had her first kidney transplant on her dad’s birthday.

Peggy Whitaker recently had a heart cath. She had a blockage and is being treated for it, but otherwise is doing pretty well.

Laramie Adams continues to need prayer. He had two unsuccessful surgeries in Lexington recently. He is home now, but will need another procedure in a few weeks.

Russell Calhoun, 86, of Hindman, died Saturday, June 8, at Whitesburg ARH. He was a son of the late Frank and Northa Slone Calhoun, and husband of the late Linda Mae Blair Calhoun. Russell was a retired master mechanic, U.S. Army veteran, member of the Knott County DAV Chapter 171, and a member of Owens Branch United Baptist Church. 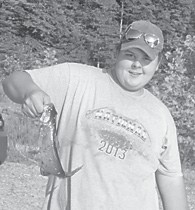 Preceded in death by parents; wife; mother of his children, Ruth Calhoun; great-grandchildren Jayden and Jaxson. Services were held at the Nelson Frazier Funeral Home, Hindman, with military services performed by Knott County DAV Chapter 171. Bill Kirby and Bethel Bolen officiated. Burial was in the Blair Cemetery at Jeremiah.

There will be a memorial service June meeting on June 22 and 23 at the Whitaker Cemetery on Johnson’s Fork at Premium. Services start at 9 a.m. each morning. There will be a potluck dinner on the grounds Sunday following services. Everyone is invited to attend.

Most everyone knows that I really enjoy genealogy. I’ve been visiting a lot of local cemeteries and taking photos of the headstones for my family tree. If you have any information that you think I could use no matter how small, please email me. 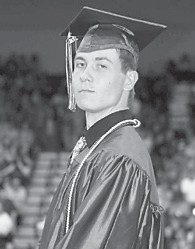 Jordan Whitaker was graduated from Letcher County Central High School on May 24. He is the son of Johnny and Tammy Whitaker of Hindman, and Teresa and Nelson Hopkins of Whitesburg.

Richard and Marsha Blair celebrated their 32nd wedding anniversary on June 13. I hope you two had a wonderful day and that you are blessed with many more love-filled years together.

Cyra Whitaker celebrated her birthday on June 14 and Sammy Gibson celebrated his on June 15. Happy birthday to both of you. I hope your special day was filled with all the love and laughter in the world.

If I have left anyone or anything out, just let me know and I will be glad you get you next time. I hope everyone has a healthy and happy week. If you would like to contact me, feel free to give me a call or you may email me at alanacouch@hotmail.com.