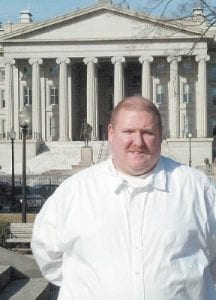 Chris Sexton, a former Letcher County coal miner who has retrained and re-entered the workforce with help from the Eastern Kentucky Concentrated Employment Program’s (EKCEP) Hiring Our Miners Everyday (H.O.M.E.) jobs initiative, was publicly recognized at a forum on longterm unemployment at the White House on Jan. 31.

Sexton was invited to the “Opportunity for All: Ready to Work” forum along with his wife, Chrissy, and EKCEP Executive Director Jeff Whitehead. The event, held in the East Room of the White House, focused on long-term unemployment and developing a more skilled and competitive workforce.

It also included an announcement from President Barack Obama as he signed an initiative to put forward $ 150 million in ready-to-work partnerships to support collaboration between local government, businesses and nonprofits like EKCEP and other workforce organizations to help workers obtain skills to make them successful in the workforce.

Following the president’s remarks, Thomas E. Perez, secretary of the U.S. Department of Labor, personally introduced Sexton at the event.

“Chris comes from a family of coal miners,” Sec. Perez said after having Sexton stand to be recognized. “It’s been a generational— not just a vocation but an avocation—for Chris and his family.

“ Regrettably, in 2012 Chris was laid off,” Perez continued. “He didn’t expect it, but it came, and Chris, like so many residents in Eastern Kentucky and across this country, got back on his feet.”

A resident of Letcher County, Sexton followed in his father and older brother’s footsteps—becoming a coal miner right out of high school. During his 13 years in mining, he found time to become certified as an emergency medical technician and firefighter, even rising to volunteer fire chief at his local fire department.

Sexton reinvented himself by pursuing a new, full-time career in emergency health-care services. He turned to EKCEP and H.O.M.E. for financial assistance with tuition, books and other fees for paramedic training at Hazard Community and Technical College.

Sexton was hired by the Perry County Ambulance Authority in July 2013 to work as an emergency medical technician. He will pursue full-time employment as a paramedic upon completion of that training in early 2014.