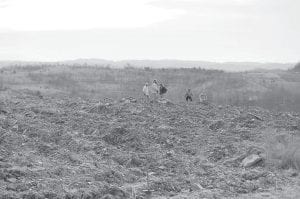 Volunteers planted trees on a reclaimed strip mine in Blackey in March as part of a pilot project for the Appalachian Regional Reforestation Initiative. Organizers of the initiative say the Obama Administration is considering funding their plan to plant 125 million trees and hire more than 2,000 people. (Photo by Sally Barto)

The Obama Administration is mulling a proposal for a jobs program that would plant trees on Appalachian mountaintops scalped by mining companies searching for coal, an official said.

A group of researchers, mining executives and government field workers, collaborating under the banner of the Appalachian Regional Reforestation Initiative, proposed the project that would both ease unemployment in the economically depressed area and restore forests annihilated by coal mining.

“This offers a tremendous opportunity for creating green jobs that will have far-reaching impacts on the economy and ecology of the region,” said Office of Surface Mining forester Patrick Angel.

The proposal, Angel said, meets many of the goals of the administration: It’s ready to start now, environmentally friendly, and would be an economic boon to communities struggling with unemployment rates that in some cases exceed 20 percent.

“It’s like all the stars and the moon in the night sky are in perfect alignment for the development of this thing,” he said. “It is an idea whose time has come.”

Christine Glunz, a spokeswoman for the White House Council on Environmental Quality, said the administration is considering a variety of proposals to diversify and strengthen the Appalachian economy.

“While a lot of ideas have been proposed, we are not considering one over another at this point,” she said.

Angel said members of the Appalachian consortium plan to meet “in the very near future” with the representatives from the Council on Environmental Quality to discuss specifics of the mineland proposal, which calls for planting 125 million hardwoods over the next five years and providing jobs for more than 2,000 people.

The Appalachian Regional Reforestation Initiative estimates that between 750,000 and 1 million acres of land in the mountain range have been deforested by mining. The organization has been planting trees for the past five years through a network of volunteers from collaborating environmental groups, mining companies and government agencies.

The United Nations, which is leading an effort to plant 7 billion trees worldwide over the next three years to combat global deforestation, has lauded the Appalachian group’s work, going so far as to send an emissary to visit a Kentucky mountaintop earlier this year to help plant saplings.

Some Appalachian mountaintops that were covered in dense forests before coal companies moved in now have the look of badlands, with scattered grasses, scrub trees and lots of dust. Because mining companies traditionally have opted to tightly compact the soil and rock on mountaintops, tree roots have difficulty penetrating.

Industry representatives are “very supportive” of the reforestation initiative — but with caveats, said David Moss, director of governmental affairs for the Kentucky Coal Association. Moss said landowners should maintain the right to choose between planting grasses or trees on their own property.

The grasslands created by mining, Moss said, have opened some of the most rugged areas of central Appalachia to cattle and horse farming and have made Kentucky home to the largest population of wild elk in the eastern United States.