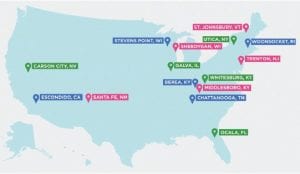 Whitesburg is among three cities in Kentucky and 15 nationwide selected to receive $25,000 matching grants to host the Levitt AMP Music Series this summer.

Whitesburg and the Cowan Community Center will host 12 free concerts —2 one every Thursday night from late May to early August. They can leave one weekend unscheduled to avoid conflicts with other events.

The concerts will be on the Mountain Heritage Stage on Depot Street.

“They are to be from a broad spectrum of music genres, so we can’t just have 12 weeks of traditional mountain music. They want something everybody will enjoy,” said Valerie Horn, coordinator of Grow Appalachia at Cowan Community Center.

“From the city’s point of view, that is a tourist attraction that is going to bring people into Whitesburg,” Mayor James Wiley Craft said. “I want to thank everyone, including my wife, who worked very hard on that.”

Cities across the nation applied to the Levitt Foundation to host the series, and 36 semi-finalists were placed on a ballot for Internet users to vote on.

That process yielded 25 finalists, and the foundation chose 15 cities from among those to receive the $25,000 grants.

In addition to Whitesburg, the cities of Berea and Middlesboro will also host concerts.

“Having the Levitt Amp Music Series hosted in Whitesburg will bring new opportunities to our community,” said Letcher County Tourism Commission Chairman Missy Matthews. “This event will attract and bring in many outsiders, giving us the ability to showcase everything Letcher County has to offer.”

Horn said the project still has to raise $25,000 to match the grant awarded by the foundation. Horn said Double Kwik has already promised to help sponsor the concerts, and other sponsors are already being sought.

Horn said a committee of organizers will travel to Los Angeles on Jan. 30 to meet with the foundation, attended the Levitt AMP convention, and meet agents for performers.

A different performer will play every Thursday night during the summer. The Farmers Market will also open before the concerts, and its food booth, which provides free meals for kids during the summer, will remain open during the shows.