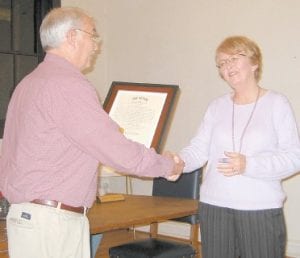 The Whitesburg City Council held a ceremony in memory of the late Reverend Jack Sparks and presented his widow, Trina Sparks, with a plaque of recognition for his service from 29th District State Senator Johnny Ray Turner and Kentucky Senate President David Williams.

Sparks traditionally opened city council meetings with a prayer before his recent death and also served as chaplain to the Whitesburg Volunteer Fire Department and Whitesburg Police Department. Mayor James W. Craft asked Mrs. Sparks to lead the council in prayer in recognition of Rev. Sparks and invited her to visit the council any time to offer an opening prayer.

“Jack considered it (his service to the city) an honor,” said Mrs. Sparks.

“One of the most pleasant parts of every meeting was Jack Sparks opening the meeting with a prayer,” said Craft. “His prayers were so sincere. I believe they extended well beyond the building.”

The council also opened bids for city property that had been declared surplus, including several police cruisers. Bids were awarded as follows:

• One police cruise: Lee Michael Caudill – $875.75 (for Heritage 2K Truck Show. This cruiser was shown in a “Show Trucks” magazine article about the annual truck show held in Whitesburg).

The council voted unanimously to accept the bids and to give Mayor Craft the authority to negotiate the sales. Craft said if all sales become final it will net the city $4,400.

Mayor Craft recommended the city accept the proposal and close the street, except in the case of easements for city workers to access the storm sewer. Councilman John Williams moved to accept Craft’s recommendation, which was approved unanimously.

Todd Adams, manager of Veolia Water, told the council there was no bad news to report for the month and that a “jetter” to clean pipes with high pressure water jets has been authorized. Councilman Williams asked Adams to install inserts to protect motorists’ tires from bumps created where manhole covers have been paved around, leaving as much as a six-inch drop. Adams said the matter would be taken care of.

• The council voted to provide gift cards to city employees for the purchase of hams or turkeys for Christmas. Mayor Craft said he would negotiate the prices with area groceries.

• The council voted to allow Mayor Craft to negotiate a rental contract for cityowned property behind Parkway Plaza Center with the management company that owns the center. The property will be used to place heating and air-conditioning units for use by the shopping center, which is being remodeled. Craft said he will propose a 10- year lease at $1,500 a month.