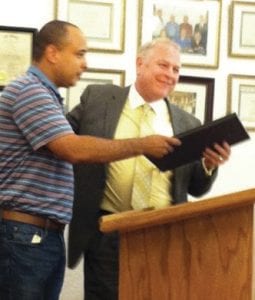 Two members of the Whitesburg City Council were presented with proclamations from the Kentucky General Assembly this week honoring them for their service in the military and their service to their community as council members. Above left, City Police Chief Tyrone Fields presents a framed proclamation to Larry Everidge. Above right, Mayor James Wiley Craft presents a similar framed award to Jimmy Bates. The councilmen served in Vietnam.

The Whitesburg City Council saw drawings for a new permanent structure for the Farmers’ Market at its May meeting Tuesday night. The council also voted down a motion that would have required changes in information included in the city’s monthly financial report.

Abigail Maggard, who works with the Farmers’ Market, presented drawings made by Whitesburg Architect Bill Richardson to the council.

Several members of the Mountain Heritage Festival Committee attended the meeting to voice concerns about the possible loss of parking for Festival vendors the permanent structure might bring, but Mayor James Wiley Craft said the Farmers’ Market will probably be closed during Mountain Heritage week.

Festival Committee Member Connie Fields said she is concerned that some of the crafters will not have parking space that is close enough to where they will present their goods. Craft told Fields the city had built the James Bates Bridge across the North Fork of the Kentucky River at the site so people could park in the city lot and walk across the bridge. He added that the Farmers’ Market structure will be built at the end of the parking lot that is fartherest from the Festival Village, which he called the “unused portion” of the lot. 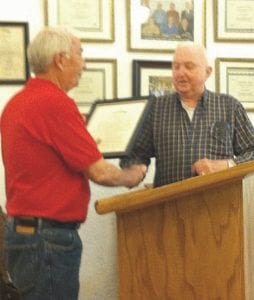 “We don’t have much space,” said Craft. “We have to make do with what we have.”

Fields replied that she felt the committee had not been given timely notification about plans to build a permanent structure on the lot. She said the failure to communicate between groups and organizations is a problem that is common in eastern Kentucky.

“This didn’t come up yesterday,” said Craft. “We talked about it last year.”

Craft said the Farmers’ Market structure is one of many things the city plans to do to bring people to town more often.

Maggard also told the council that this year’s Farmers’ Market will have vouchers for senior citizens as well as a cooperative program with Mountain Comprehensive Health Corporation that will provide “prescriptions” in the amount of $28 each for needy families that can be spent at the Farmers Market to purchase fresh fruit and vegetables.

The Farmers’ Market will open June 13. Craft said the Market is one of his favorite projects and complimented Maggard and her co-workers on the job they did last year.

In other business, Council Member Robin Bowen Watko suggested that the monthly financial report should contain more information than it currently does, particularly about incoming and outgoing funds.

Craft said he had no problem with doing what Watko suggested and asked her if she wanted to put her request in the form of a motion. Watko made the motion, which was seconded by Earlene Williams. After the results of a voice vote proved difficult to determine, Craft called for a roll call vote that failed three to four, with Watko, Williams and Derek Barto voting yes while James Bates, Sheila Shortt, and Larry Everidge voted no. Craft, who only votes in the event of a tie, voted no as well, defeating Watko’s motion.

“The reason I voted no on that motion was for two reasons,” Craft said after the meeting. “All of that is public record and can be inspected during regular business hours, but most importantly that information is contained in the financial reports that we furnish the council every month. All you have to do is look at it (the report) and you can see what money comes in and what money is spent.”

Watko also asked Craft the status of an audit of city finances that is underway. Craft said he had seen a draft but the complete audit is not finished. He said that when the report is final, he will provide a copy to each council member.

In response to a question about the annexation of Solomon Road, Craft said he has asked Letcher County Surveyor Richard Hall to get started on a survey of the area to be annexed.

Water Maintenance Director Chris Caudill told the council he had some unpleasant news about several pumps.

Caudill said that a sewer pump in Whitco is down and will cost $12,000, in addition to a $4,000 deposit the city has already made, to replace. Caudill said there is no option but to buy a new pump. He also said a pump at the city water plant will require replacement parts that will cost at least $5,800, adding that he is still getting prices for the other parts required to fix the pump.

Caudill said problems with pumps at the city wastewater plant have led him to stop the practice of allowing septic tank pumping firms and others to dump sewage there.

In other business, the council voted to allow the Mountain Heritage Festival Committee to hold a downtown “Glow Run” on June 20 at 9 p.m. In the event of rain, the event will be held June 27.