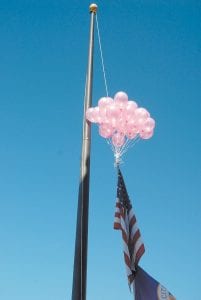 Members of a Letcher County sorority decided to think big and pink this month by encouraging businesses to decorate their storefronts in observance of National Breast Cancer Awareness Month. Calling their campaign “Wipe Out Whitesburg with Pink”, Zeta Zeta Chapter of Beta Sigma Phi Sorority challenged organizations and businesses to promote breast cancer prevention and awareness by decorating their structures using pink materials. Participants gave a $25 donation to the sorority to be judged on creativity, promoting education, theme and having the most pink. The money — more than $1,000 — will be donated to the Susan G. Komen Breast Cancer Foundation. Prizes were awarded for first, second and third places.

“We were thinking we probably wouldn’t get a big response,” said Tracy Brown, treasurer.

Carrie Lee-Hall, vice president of the sorority, works as a nurse practitioner and nurse midwife in Hazard and said about five businesses in Perry County usually participate in a similar event. She was expecting Whitesburg to have about the same number of participants. 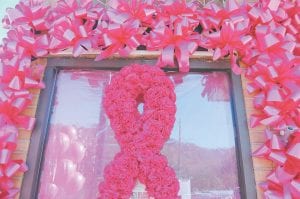 Pink bows and flowers decorated Whitesburg Florist as part of the “pink out.”

But businesses were quick to respond. Hobo’s Diner was one of the first to decorate its windows. Employees painted two women in softball uniforms with the message “Don’t let breast cancer steal second base. To create your own early detection plan visit www. mypinkplan.com.” Hobo’s gave away a free mammogram on Friday.

Then pink bows started popping up all over Main Street in Whitesburg. Oct. 16, employees at Annie’s Frugal Finery began painting the building pink.

“I just couldn’t believe it,” said Lee-Hall. “The judges were astounded. It was really neat.”

On Oct. 22, the day of judging, 34 businesses had participated in one way or another.

“It was an overwhelming response,” said Lee-Hall. “That is one thing about our community. Everyone comes together in events like that. It is just amazing.”

A pink t-shirt was part of Sheriff Danny Webb’s uniform on Friday.

Bunches of light pink balloons were placed on Whitesburg City Hall, including pink balloons floating from the top of the flagpole.

Pink pumpkins, a pink skeleton and a pink spider sat in a window at The Looking Glass Salon.

Community Trust Bank made a tribute to breast cancer survivors and had a bake sale with proceeds benefiting its American Cancer Society Relay for Life team. Inspiring messages were painted on all of the Double Kwiks in Letcher County. 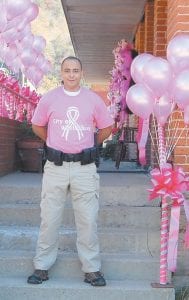 Whitaker Bank in down- town Whitesburg won second place. Lee-Hall said the judges were impressed by the display of pink scarecrows and the bank was “big on promoting education.”

Dr. David Narramore, DMD won third place by turning his dentist office into a nightclub complete with a disco ball and pink carpet. Gloria Gaynor’s song “I Will Survive” played continuously outside the building. Narramore and his staff served breakfast Friday morning to breast cancer survivors.

Kentucky Laureate Rho Chapter won a prize for the most unique display by decorating a flowerpot figure with lots of pink.

Annie’s Frugal Finery and Whitesburg Florist each won a prize for using the most pink.

“I couldn’t believe the amount of men who wore pink that day,” said Lee- Hall.

“Breast cancer is big in our county and prevention and awareness is important to a lot of people because so many people have been affected,” said Lee-Hall.

Lee-Hall said the sorority plans on hosting a similar event next October.