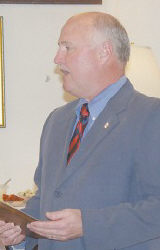 Sen. Johnny Ray Turner, left, and the key to the city he received last week.

State Senator Johnny Ray Turner was the man of the hour at a special called meeting of the Whitesburg City Council.

After presenting Turner with a key to the city at the April 22 meeting, Mayor James Wiley Craft told the council the City of Whitesburg owes a huge debt of gratitude to Senator Turner, not only for helping to secure funding to extend new water lines into the Fields Cliff neighborhood, but for securing an additional $250,000 in state funds for the new city/county wastewater treatment plant.

Craft said that thanks to Turner, the $1 million loan from the U.S. Department of Agriculture has already been reduced to $750,000. He said Turner had learned of the city’s need and had approached him concerning the funds. Craft told the crowd there will be a considerable savings in interest from reducing the amount of the loan which can be used for other necessary work in the city.

“We have Senator Turner here to thank him for his help to the people living in Whitesburg and all of Letcher County,” said Craft. “It is a great honor to present the key to the City of Whitesburg to Senator Johnny Ray Turner, in deep appreciation for his tireless assistance to all the cities in Letcher County in the 2008 session of the General Assembly.” 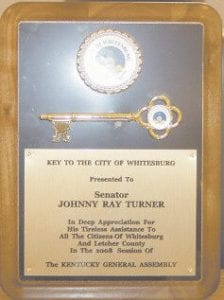 Turner thanked Craft and the council and said they made his job easier by providing him with information about the needs of the city. He told the packed council chamber that his experience as a high school basketball coach had taught him that teamwork is necessary to succeed, a lesson which served him well in a Senate chamber dominated by the opposition party.

“This is the first key to a city I’ve ever received and I will display it proudly in my office in Frankfort,” said Turner. “I’m an old basketball coach and one thing I’ve learned is that if you want to succeed, you have to work as a team. It’s the only way we will ever be successful. My number is in the telephone book and I want to be available to the people I serve. I am always available if you are in Frankfort to take you on a tour of the state house.”

“You have the key to the city and you have the key to our hearts,” said Mayor Craft. “Johnny Ray Turner will show his constituents around the Senate chamber and the Capitol annex and he will treat you like royalty just like he did for us. I want to thank Johnny Ray and the fiscal court for helping us get this funding for the city.”

Craft told the gathering that although the presentation to Turner was the only item on the agenda, he wanted to give a short report on the gross revenue tax paid by merchants who sell alcohol in their business establishments. He said a new speaker system that will be erected in the city cost $7,500 and was paid for by the tax. Craft said he hopes to have the speaker system up and running by July 4, when the city will play patriotic music throughout the day. The tax also paid for new Christmas displays for the city and for a new dump truck for city use.