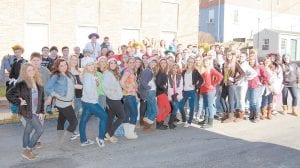 The Whitesburg Middle School UNITE Club was recently named a regional UNITE Club of the Year. The group sang Christmas carols in downtown Whitesburg in December. Debi Sexton is the club sponsor.

The Whitesburg Middle School UNITE Club has been named UNITE Club of the Year for Region two.

The club, which is one of nine to be recognized, will receive an additional funding of $750 for antidrug activities during the remainder of the school year. Club members will also be treated to a pizza party by Operation UNITE (Unlawful Narcotics Investigations, Treatment and Education).