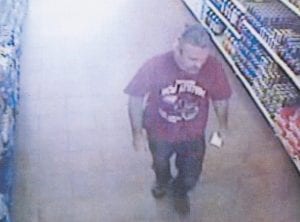 Whitesburg police say this man, whose identity officers do not know, has been stealing expensive cellular telephones from Wamart in Whitesburg.

Whitesburg police are looking for a man who stole two cellular phones and an iPhone case during multiple trips to the Whitesburg Walmart last week.

The man, who has not been identified, pried open a cell phone display case located in Walmart’s electronics department and stole a phone on Sept. 4, Whitesburg Police Officer Alisha Congleton said.

He is shown on video surveillance footage walking into Walmart again at 4:09 p.m. on Sept. 5 and leaving the store at 4:12 p.m. The man broke the hinges off of the display case on Sept. 5 and took another phone and a phone case, Congleton said.

During the two-day period, he stole a Samsung Galaxy valued at $249, an Android smart phone valued at $79 and an iPhone case valued at $29.

The custom-made display case which was damaged is estimated to be worth $1,000, Congleton said.

Anyone with information as to whom the man is in the photo taken from video surveillance is asked to call the Whitesburg Police Department at 633-2737. Callers can remain anonymous. 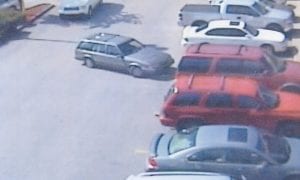 Whitesburg police say the suspect in the photo at the top of this page has been seen arriving and leaving Walmart in the car pulling out of the parking spot in the photo above and the white van in the photo below. 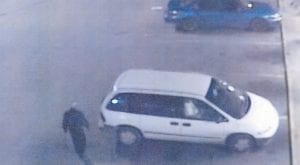