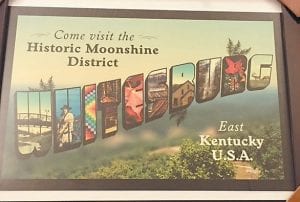 Whitesburg businessman Joel Beverly commissioned the artwork seen above and presented it to Mayor James Wiley Craft. The lettering includes local scenes such as Bad Branch Falls, the downtown walking bridge and the Graham Memorial Presbyterian Church. Craft will explore having the work placed on large signs.

The Whitesburg City Council voted unanimously this week to remove a highly unpopular three percent additional tax on food that only applied to restaurants that sell alcohol, and was levied in addition to the state’s six-percent sales tax on food.

Mayor James Wiley Craft recommended the move at the council’s March meeting Tuesday night, saying the tax is unfair because it applied only to those restaurants that sell alcoholic beverages and that all the patrons of the restaurants are charged the tax regardless of whether they purchase alcohol or not.

The city will still charge a three percent tax, but only on alcoholic beverages sold in restaurants.

Craft told the council he will take immediate steps to amend the city’s alcohol ordinance to take off the tax on food.

After Tuesday night’s meeting, Craft said the city’s treasury will suffer somewhat because of the removal of the tax, especially when it comes to financing special events such as the annual July 4 celebration and fireworks. Craft said one of the six restaurants that currently pay the tax recently wrote the city a $4,000 check for one month. Still, he said the city had to weigh the benefits of the tax against the harm it was causing restaurants during the current poor economy caused by the loss of well-paying mining jobs.

Tuesday’s action will almost certainly be met favorably by the owners and managers of Pizza Hut, Las Penas Mexican Restaurant, Street Side Grill and Bar, Heritage Grill, and The Thirsty Heifer, some of whom have complained that customers who don’t order alcohol balk when a $20 food tab ends up costing $22.40 instead of the $21.20 it would cost in restaurants that don’t sell alcohol.

A sixth restaurant, Summit City Coffee, had also been paying the extra tax on food as well, but is closed for the next six weeks. Summit City owner Joel Beverly sees the removal of the food tax as a positive development.

“This is really exciting,” said Beverly. “This vote will help ensure that downtown continues to thrive. Downtown is the reason so many people visit Whitesburg instead of Hazard, Harlan or Wise. There’s no place around that offers the diversity in nightlife that Whitesburg does.”

Beverly hopes the council’s vote is the first of several changes he believes are needed to help local restaurants and other small businesses stay open during the challenging economy.

“I hope this move is the beginning of a bigger conversation of what exactly needs to happen in Whitesburg to make sure we stay healthy and vibrant in these tough times,” he said. “Many communities in eastern Kentucky are going to have a very tough time in this new economy we’re living in now. I hope that Whitesburg can be cutting-edge in creating a space and a culture to where small businesses can thrive. If we do this, we will have a chance.”

Mayor Craft also told the council that he has instructed city employees to take action to terminate service to water customers who are over 60 days delinquent on their bill and have made no attempt to set up a payment schedule or otherwise settle their accounts. The ordinance to terminate service to customers with a delinquent account past 60 days has been on the books for a number of years and last time the city took such action was in 2013. At that time, it resulted in a number of delinquent accounts being brought up to date.

Craft said it is unfair to those customers who pay their bills regularly to be forced to subsidize those who do not pay. Council member Earleen Williams asked if the 60 day plus delinquents are people who have attempted to make arrangements to pay and Craft said no, adding that people who have set up payment plans or made other arrangements to settle their accounts will not be terminated.

“I know it’s hard times,” said Craft, but added that it is also unfair to the people who pay their bills on time to take no action. He suggested that council members will probably be hearing from delinquent account holders as soon as their service is terminated. “You will probably get calls,” he added.

In other business, Mayor Craft presented a framed picture he received from Whitesburg businessman Joel Beverly that invites people to “Come and visit the Historic Moonshine Distract in Whitesburg East Kentucky, U.S.A.”, with a scenic backdrop of local scenes. Craft said he will explore the possibility of having the picture put on larger signs to be placed at each entrance to Whitesburg to welcome visitors and highlight the city’s offerings.

Paul Nesbitt of Nesbitt Engineering, who works with the city on water and sewer issues, told the council that he looked into the possibility of extending city sewer lines to a neighborhood in Whitco that could add a significant number of new customers to the city sewer rolls. He said the extension will require a line bore under the Kentucky River.

Nesbitt also said he was pleasantly surprised to learn of new funding possibilities for eastern Kentucky municipalities during his last visit to Frankfort. He said he was informed that a number of 100 percent grant funding possibilities, which are not loans and do not have to be repaid, have come about through federal actions to help to alleviate problems caused in coal producing counties as coal production has dwindled. When Mayor Craft also expressed his surprise at the possibility of 100 percent grant funding, Nesbitt said it is from federal funds that will pass through the state to lessen the impact of the mining reductions.

City Water Maintenance Manager Chris Caudill reported two main water line breaks in the last month and that he had to repair the main valve on the old city water tank at the site of the old Whitesburg High School. Caudill said he has had to rebuild the valve before and it will cost $6,500 to install a new one.

Caudill added that two large 65 HP pumps that run from variable speed motors at the city’s wastewater plant have been in service for 10 years and will need attention soon or the risk of failure will grow. He said one of the pumps needs attention now. Caudill said the work is necessary and the cost of replacing the pumps in the event they fail would be high. He asked the council’s permission to pull the pump that needs service the most and have it worked on. The council voted unanimously to allow him to proceed.

The council also approved three roadblock dates for the Mountain Shrine Club. The dates are May 14, June 1, and October 8. Money raised at the roadblocks will go to the Shriners’ Hospital for Children.