Whitesburg’s ‘Bill Dug Hole’ got its name from Vermillion 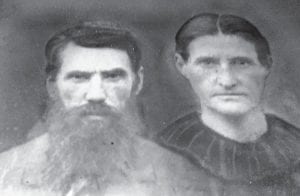 William Scott Vermillion posed for this portrait with his wife Ella Jane Morgan. Vermillion, was considered one of Letcher County’s most prominent citizens at the time of his death in Whitesburg in 1925. The “Bill Dug Hole,” a deep fishing and swimming hole in the North Fork of the Kentucky River, is named for Vermillion.

Once upon a time not too long ago — mainly before construction of the Whitesburg bypass began in the late 1970s — many Letcher County residents learned how to fish or even how to swim in the “Bill Dug Hole,” a deep pool of water in the North Fork of the Kentucky River.

There have been many tales about the origin of the name of the old fishing and swimming hole, which was formed naturally by large rocks that fell from a steep cliff. One myth even has it that two boys named “Bill” and “Doug” drowned there.

Truth is, the “Bill Dug Hole,” located just upstream from River Park, took its name from a Whitesburg man who died 90 years ago this month.

William Scott Vermillion, known then as “Bill Dug” to many, died April 4, 1925, just one day shy of his 77th birthday. 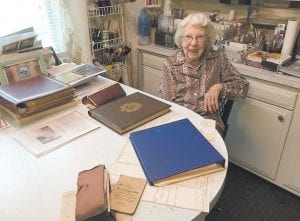 Judith Vermillion displays some of the Vermillion family history she has put together over the years. She has known for years how the ‘Bill Dug’ got its name.

“I’ve always heard it was named after him,” said Judith Vermillion, whose late husband was a grandson of William Scott Vermillion. “He owned that whole hospital area.”

Judith Vermillion has been a student of the history of her in-laws since she married Eugene Vermillion in 1949. Along the way, she learned that “Dug” had long been the local nickname for Vermillion. She said the family spelled the nickname “Doug,” and that it apparently originated with William Scott Vermillion’s father, Douglas Irby Vermillion, a Russell County, Virginia native who died in Whitesburg at age 69 in September 1885.

“It just came right on down,” she said of the nickname. “From then on they were called the ‘Doug’s.’ There’s no rhyme or reason for it.”

When The Mountain Eagle covered the death of William Scott Vermillion as its lead story on April 9, 1925, the paper said he was known as “Bill Dug (to) most all who knew him.”

“For intelligence and business tact no man in the mountains excelled him,” the story said. “Reared in a day very different from ours he acquired that strong and rugged characteristic that made him unique in many particulars. Strictly honest, square, noble-hearted, brave and manly, he won his way into the hearts of old friends.”

“They said he was a strong-willed man, and I’m being nice,” Judith Vermillion said smilingly.

Five months after the death of “Bill Dug” Vermillion, The Eagle carried a remembrance from then-editor and publisher Nehemiah M. Webb that indicates the “Bill Dug Hole” may have once been known as the “Cornelia Hole.”

Wrote Webb in the paper’s September 17, 1925 edition: “Can you recall … how John Riddle, Bill Dug, John Gardner, Jake Fitzpatrick, Pat Salyer, Jim Frazier, Monroe Webb and others got so hot they almost had a fit? And how we went a-swimming in the Cornelia hole or sat for hours on the big rock near Bill Dug’s and waited for a nibble?”

On June 1, 1922, The Mountain Eagle carried the following note on its front page about a visit to Whitesburg that week by Douglas Irby Vermillion Jr., a younger brother of William Scott “Bill Dug” Vermillion: “Irb Dug, after an absence of over 30 years, is visiting his brother, W.S. Vermillion, here. He is considerably older than he used to be when he rode that little mule.”

Early editions of The Eagle also show that what is now called Tunnel Hill in Whitesburg was once known as “Dug Hill.”

On May 30, 1929, The Eagle de scribed a car wreck “at the top of Dug Hill overlooking the upper end of the railroad tunnel” as the “worst car wreck ever known in Letcher County.”

According to the story, the car was carrying eight men, some of them who worked as coal miners in Lynch, when it plunged about 100 feet over Dug Hill and landed near the mouth of the L&N Railroad Tunnel. One passenger died in the crash while two others were critically injured.

On November 10, 1910, The Eagle published a story entitled “The Colored Man Arrives,” in which local citizens were called upon to welcome the 125 or so black men and women who had arrived to work on the Dug Hill tunnel. The report said the workers arrived “travelworn, dusty, sick and hungry, in wagons, dump carts, wheel scoops, horseback, straddle back and afoot.”

“Most of our people had only seen a (black person) occasionally,” the story continued, “and to see dozens of them along our streets was almost to them like going to a circus. … Two or three camps will be constructed at once, one above town on the Jenkins farm near the Dug Hill Gap. It is understood that most of the winter will be spent on the Dug Hill tunnel.”

Among the children born to William Scott Vermillion, or “Bill Dug,” was William Irby A. “Billy” Vermillion, who founded the old Dr. Pepper bottling plant in Whitesburg [it was located in the building which now houses Appalshop] and worked for the Whitesburg Wholesale and Lewis Wholesale firms.

The “Bill Dug Hole” remains, but its appeal has suffered greatly since the Whitesburg bypass was built. What used to be a sandy area where families gathered on weekends to picnic, fish or swim is grown up with weeds and briars in the years since a large highway bridge was built nearby. That people do still fish there on occasion can be seen by discarded fishing line that lies tangled along the bank.

While the deep hole of river water is no longer a popular recreation spot, it may still hold value as an emergency water source for the City of Whitesburg.

When the city’s low-water dam filled with silt in the early 1970s and left the town in crisis, city officials considered using the “Bill Dug” as its water source.

That event, which was reported on in the October 14, 1971 edition of The Eagle, marks the last time the “Bill Dug Hole” made news of any significance.