Who are this year’s ‘most fascinating’? 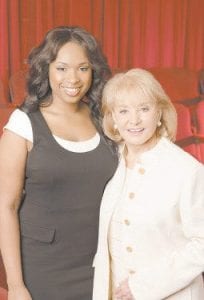 Jennifer Hudson, left, will be spotlighted on “Barbara Walters Presents: The 10 Most Fascinating People of 2007”, an hour-long ABC News special highlighting some of the year’s most prominent names in entertainment, sports, politics and business. The show airs Dec. 6. (AP Photo/ABC, Craig Sjodin)

Another year, another set of fascinating people.

Barbara Walters is weighing in with her annual “10 Most Fascinating People” special, and, as usual, viewers are likely to greet the list with an approving nod here and a dubious scratch of the head there.

Rounding out the list are two surprise guests, including the No. 1 Most Fascinating Person of 2007. They both will be announced during this ABC News special, which airs tomorrow (Thursday) at 10 p.m..

You can start your guessing (and second-guessing) now.

Other shows to look out for:

– An impulsive winter outing turns into a life-and-death struggle for a woman and her estranged husband in the Lifetime film “Lost Holiday: The Jim and Suzanne Shemwell Story.” Jami Gertz (“Still Standing”) and Dylan Walsh (“Nip/Tuck”) star as the divorced couple who become stranded in a blizzard during their ill-advised frolic on a snowmobile. It all begins when Suzanne Shemwell’s ex unexpectedly comes to Idaho for a family visit just before Christmas. Suzanne isn’t happy to see him, but makes the most of it for their daughters’ sake. Can Suzanne and Jim work through the conflicts that tore them apart, and pull together, when their lives are on the line? It airs 9 p.m. Saturday.