Who sang ‘Harden My Heart’? 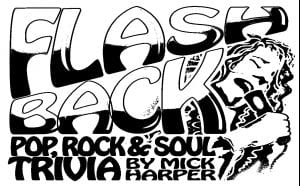 1. What was the first pop group memorialized in London’s Madame Tussauds Wax Museum? How were they posed?

5. Name the song with this lyric: “I seen lonely times when I could not find a friend.”

Answers 1. The Beatles, in 1964. They were sprawled on a red couch and playing instruments.

3. They were a house band at Stax Records in Memphis, working behind Otis Redding, Wilson Pickett and others in 1962.

4. Quarterflash, in 1980. The following year, their “Night Shift” was used as theme song in the film of the same name.

5. “Fire and Rain,” by James Taylor in 1970. Rumor and myth surrounding the song are wrong. The “Suzanne” mentioned was someone he met, not his girlfriend who died while flying to see him. The other verses talk of his time in rehab centers, wanting to “make a stand” against drug addiction.