Who will replace Oprah? 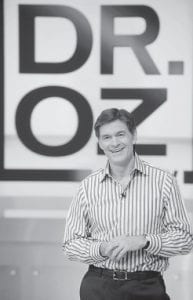 Dr. Mehmet Oz is pictured during the production of The Dr. Oz Show in New York. (AP Photo/Harpo Inc.)

Will it be Ellen DeGeneres, Dr. Phil or Dr. Oz? Maybe none of the above. The announced shutdown of “The Oprah Winfrey Show” in two years creates room for a new queen (or king) of daytime television.

Until that day when Winfrey’s 7 million or so daily viewers start looking for something else to do, preparing to claim that audience will be one of the biggest competitions in television.

“You haven’t had a time period like this open up in 25 years,” said Larry Gerbrandt, an analyst for the firm Media Valuation Partners in Los Angeles. “It really gives the players a chance to reshuffle the deck.”

Nowhere now in daytime television is there a show with the breadth of Winfrey’s, which can feature an interview with singer Whitney Houston about her drug use one day, or Sarah Palin about a contentious campaign the next. She can do a serious hour about domestic abuse, bring Tom Cruise on to jump on her sofa, host a party with the Black Eyed Peas or give away cars to everyone in her audience.

The two shows closest to Winfrey’s in the ratings are hosted by her proteges, Dr. Phil and Dr. Oz. Yet “Dr. Phil” has been around a while and the ratings indicate viewers are starting to tire of his form of tough love.

“Dr. Oz” was a breakout hit as a newcomer this fall, but its appeal as a health-oriented show is limited. Winfrey only had him as an occasional guest, and there are questions about how many people want to see him every day.

Both, however, will have restrictions removed from their contracts that prevented their shows from airing at 4 p.m. ET each day — Winfrey’s preferred time slot and generally considered the key time in daytime TV because there are more people available to watch, said Bill Carroll, an expert in the syndication market for Katz Television.

Winfrey has a financial stake in both shows, so if their audiences increase because she leaves, guess who benefits?

Strictly from a business standpoint, then, it seems odd that Winfrey has given signals that appear to be anointing DeGeneres as her chosen successor at the top of the heap. They’ve traded appearances on each other’s shows recently and guess who’s posing next to Winfrey on the latest cover of “O, The Magazine”?

“Ellen is probably in the best position to move into that role,” said daytime TV host Jerry Springer.

DeGeneres’ breezy show is primarily entertainment-oriented and less varied in topic than Winfrey’s. But it has a greater potential to be broader than many of its rivals, and her profile should only increase with her upcoming role on “American Idol.”

“Guests won’t be afraid to go on Ellen,” Springer said. “Any edge she might have is neutralized by her humor. She can be light yet she’s obviously very bright. If you’re looking to sell something, like a book or a political idea, you’re not going to get beaten up by going on her show.”

Television stations that have been reluctant to air DeGeneres’ show at 4 p.m. for fear of competing with Winfrey would be much more willing with that roadblock gone, and her syndicators will be pushing to put her in that slot.

For all the promising signs for DeGeneres, her show still doesn’t have as large an audience as “Dr. Phil” and “Dr. Oz.” And she should be wary of another formidable competitor: “Judge Judy.” The courtroom program isn’t a talk show but is strong in the ratings in the late afternoon. There’s no guarantee that Winfrey’s old viewers will gravitate toward a talk show, or television at all. Daytime TV ratings have been sinking steadily over the years with more women in the work force, and Winfrey’s exit could accelerate the decline.

Other competitors are Rachael Ray, an appealing personality whose show now takes a lot of morning slots, and Tyra Banks, who appeals to younger viewers. Meanwhile, Winfrey protege, makeover artist Nate Berkus, is readying his own show but there are questions about how limited his appeal would be.

“I’m sure there are people on the phone to their agents saying, ‘Get me a meeting, I’m the next Oprah,’” Carroll said. “I would advise them to look up (failed daytime host) Jane Pauley’s phone number. Wanting to be that and doing that are two different things.”

Potential king-makers are executives at ABC stations. Winfrey’s show has aired in the afternoon in several key ABC-owned stations, such as New York and Los Angeles. That’s considered vital for these stations in funneling viewers to local newscasts, and soon that security blanket will be gone. If these stations act in concert to place one show in the time slot, it’s a huge competitive advantage.

There’s some chance these stations won’t do that at all, that they’ll air another hour of local news instead. ABC executives were not talking on Friday about a decision they have more than a year to make. It’s what makes answering the question of who will lead daytime TV more complex: There are hundreds of stations all over the country that make their own decisions what to air then.

One thing that seems certain is that none of these existing shows or not-yet-conceived programs will have the audience, or cultural impact, of “The Oprah Winfrey Show” — certainly not at first and perhaps never.

Winfrey goes to the new OWN cable network upon leaving her show, where she’ll have the chance to program a network of her own creation. While “The Oprah Winfrey Show” on broadcast TV will be no more, it’s not clear whether Winfrey will be appearing on the network in some fashion or not.