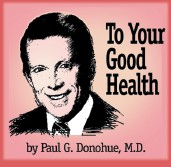 DEAR DR. DONOHUE: My husband has had a cough that seems to have lasted forever. He saw several doctors. Each gave him a different diagnosis and different treatment. None worked. The last doctor believed he had whooping cough and tested him for it. He did have it. The doctor said the cough would go away. He put him on antibiotics, but he said they wouldn’t shorten the cough. Why did he give them to him? Isn’t whooping cough a thing of the past, and wasn’t it a children’s disease? — K.P.

ANSWER: Whooping cough — pertussis is the medical name — used to be a frequent childhood illness. It is highly communicable, and in some infants, it proves to be fatal. The vaccine practically eliminated it. Adults get it, too, even if they were vaccinated in childhood. The vaccine loses its power in five to 10 years. Booster shots are necessary to shield people from the bacterium that causes the illness.

The typical course of whooping cough in a youngster consists of a week where the child appears to have cold symptoms. Then the child experiences explosions of a hacking cough that can be so violent that the child vomits after coughing. When the cough calms and the child takes a deep breath in, a highpitched whooping sound is heard. The cough disappears gradually in a month. When treated early with the antibiotics erythromycin or azithromycin, the course of the infection is shortened.

Adult whooping cough is different. No whooping sounds are made. Adults cough and cough, and may do so for months. They are usually seen far too late for antibiotics to do any good. However, the antibiotics are prescribed to stop the spread of the whooping cough bacterium.

Whooping cough is making a resurgence and spreading across the country. Some infants have died from it. One reason is that many parents have opted to not have their children immunized out of fear of vaccine complications. Vaccines have been one of medicine’s greatest achievement in prevention of diseases. Fear of them is unsound and dangerous.

DEAR DR. DONOHUE: On seven occasions, I have had severe pain in my right big toe. It hurts so bad that I feel like going to the emergency room, but I feel stupid about going for toe pain. My uncle has gout and diabetes. Can you have gout without having diabetes? What should I do? — J.P.

ANSWER: At your next attack, you should go to a doctor immediately. You can have gout without having diabetes. They’re not related.

The pain of gout is severe. You are not the least bit stupid for seeking relief from it. The attacks you have sound like gout. You’ve had seven attacks; you’re likely to have more. You can obtain effective medicine to stop them.