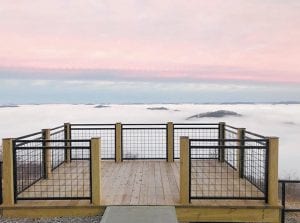 WINTER’S BEAUTY — The view from atop Pine Mountain near Whitesburg is never the same, depending on the weather and the season. This awe-inspiring shot was taken early one morning last week at a new scenic overlook built by the Letcher County Tourism Commission. (Photo by Patricia Collins Bentley)

And at the top of the list among county officials is the county judge/ executive.

Two of the three candidates run-

Editor’s note: Between now and the May primary election, The Mountain Eagle will take a closer look at the candidates running for county offices that are contested. We begin this week with a look at the races for the office of Letcher County Judge/Executive. ning have been on opposite sides of the political fence during the past few years, while the third is seeking the office her father lost more than a decade ago.

Three-term incumbent Judge/ Executive Jim Ward, 58, of Sandlick, is a Democrat and is unopposed in the primary, but in the fall, he will face the winner of the Republican primary. An independent candidate could also file to run before the April 2 deadline.

On the Republican ticket, current District 2 Magistrate Terry Adams, 49, of Isom, is running to unseat Ward, and will face Mica Smith Johnston, 33, of Oscaloosa, in the primary.

MEET THE CANDIDATES — Republican candidates for Letcher County Judge/Executive are, from left, current District Two Magistrate Terry Adams and Mica Smith Johnston, who is pictured with her husband, Jeremiah. Pictured at right is incumbent Judge/Executive Jim Ward, who is unopposed on the Democrat ticket.

This is Johnston’s first run for political office. She is the youngest daughter of former Judge/Executive Carroll A. Smith, who lost to Ward in the 2006 general election.

Ward and Adams have been polar opposites on most issues over since Ward’s election, as Ward and Johnston’s father were when Ward was a magistrate. The next few months will give residents a chance to see all three candidates and decide which they think is most capable of running a county that has a strapped budget and a huge unemployment problem.

So what are we electing and what qualities and qualifications should be look for when we vote for a county judge/executive?

There are only two formal qualifications. A person planning to run for county judge/executive must be a resident of the county and at least 24 years old to run. There are no other qualifi- cations, though the duties are extensive and growing. Salaries range from about $65,000 a year for judges with the least experience in the smallest counties, to about $113,000 for larger counties and more experience.

What we’re not electing is a trial judge.

The first two Kentucky Constitutions in 1792 and 1799 did not include an office of county judge at all — justices of the peace were the top officials in the county. County judge was added in the 1850 constitution to preside over the County Court (which handled appeals from Justices’ Courts), Court of Claims ( which paid county bills and conducted other governing activities), and quarterly court (which handled minor criminal and civil cases).

The office was expanded in the 1891 Constitution to make the county judge the presiding officer of fiscal courts, which were made up of the judge and the justices of the peace, also known as magistrates.

A Constitutional Amendment in 1975 removed the judges’ and magistrates’ judicial duties. That change made the county judge the chief administrative officer of the county, and made the justices of the peace members of the county legislative body, called the fiscal court. Legislation in 1976 changed the name of the office to county judge/executive.

Under the reorganization, magistrates have no authority outside a fiscal court meeting. The day-today operation of the county, such as roadwork, employee supervision, and other business, is overseen by the judge/executive.

According to Kentucky law, the duties of a judge/ executive “shall include, but are not limited to, the following:

“(4) Require all officials, elected or appointed, whose offices utilize county funds, and all boards, special districts, and commissions exclusive of city governments and their agencies located within the county to make a detailed annual financial report to the fiscal court concerning the business and condition of their office, department, board, commission, or special districts;

“(5) Consistent with procedures set forth in KRS Chapter 68, prepare and submit to the fiscal court an annual budget and administer the provisions of the budget when adopted by the fiscal court;

“(6) Keep the fiscal court fully advised as to the financial condition and needs of the county and make such other reports from time to time as required by the fiscal court or as he deems necessary;

“(7) Exercise with the approval of the fiscal court the authority to appoint, supervise, suspend, and remove county personnel (unless otherwise provided by state law); and

“(8) With the approval of the fiscal court, make appointments to or remove members from such boards, commissions, and designated administrative positions as the fiscal court, charter, law or ordinance may create. The requirement of fiscal court approval must be designated as such in the county administrative code or the county charter. In counties containing a city of the first class, the county judge/executive shall appoint to those seats which are not subject to prior qualification on a board or commission an equal number of members from each district, as defined in KRS 67.045, into which the authority of the board or commission extends. If there are more districts than members of a particular board or commission, he shall not appoint more than one (1) member from any district. If there are more members of a particular board or commission than there are districts, he shall equalize appointments to the extent possible. The county judge/executive shall not be required, but shall use his best efforts, to balance appointments on a board or commission if the appointments are to be made from nominees submitted by other groups or individuals or if nominees must have a professional or technical background, expertise or membership. He shall attempt to balance appointments among all such boards and commissions in order to equalize representation of all districts over the entire range of such boards and commissions.”