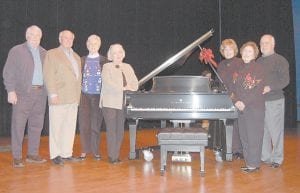 Members of the Whitesburg High School Alumni Committee gathered in the Letcher County Central High School auditorium last week to catch a glimpse of a piano they had dreamed the school would one day embrace.

“Our committee and the contributors wanted nothing but the best piano for this beautiful auditorium and we did not stop until we were able to get it,” said Phyllis Hall Adams, a former principal of Whitesburg Middle School and a member of the WHS Alumni Committee.

Almost 200 WHS alumni donated more than $38,000 for the purchase and delivery of a Steinway “B” concert grand piano that arrived at the school on December 17.

“If you have the best school, you need the best piano,” said Don Webb, a WHS alumnus from Vero Beach, Florida. “The number one importance is they need it for the students to go with the school.”

Anna Daniel Hall, a WHS alumnus of Whitesburg, said to have an instrument of high quality will make it more condusive for professionals to come to the school and play concerts.

Bert Francis and his wife Arlayne Collins Francis of Richmond were instrumental in forming the alumni committee.

“Music was a center activity for our high school classes,” said Bert Francis.

Arlayne Collins Francis said she remembers a grand piano being played during recitals and plays when she was in elementary school. She hopes students will gain an appreciation and love of music similar to what she developed while in school.

Anna Craft, superintendent of the Letcher County School System, said some LCCHS students take piano classes taught by Jessica Auvil, but Craft would like to see students learn how to play piano at a much younger age.

Starting next school year Craft would like for all thirdgrade students to take beginning piano lessons. Craft said the pilot program would enable students to learn how to read music.

The WHS Alumni Committee is now focusing on raising funds to provide keyboard and piano training for the elementary schools.

“Piano is so important — particularly for math achievement,” said Craft.

Theresa Moore, a WHS alumnus, donated a baby grand piano which is used in the high school piano lab. Craft said she looks forward to hearing duets played on the baby grand and grand concert pianos.

“We are thrilled to have such a piano for our students and our community,” said Craft. “It should be an incentive for piano students for generations to come as well as an attraction for piano artists in Letcher County.”

Craft said a formal recital will be held in the LCCHS auditorium in the spring.