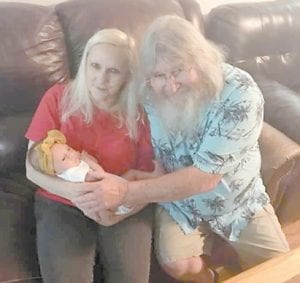 Larry and Linda Hatton are pictured with their great-granddaughter.

I was so happy to be one of the nine that met at Pine Mountain Grill this past Saturday to start planning our Whitesburg High School reunion this year. Believe it or not, it will have been 45 years since I graduated from high school. Well, you all may believe it, but I surely don’t.

As we sat there just talking I was taken back 45 years to the Whitesburg High School cafeteria. It was an eerie feeling to tell you the truth. I loved it, although a whole lot of my friends’ faces were missing. I wish we could go back and do it again, maybe for just one week. I know I would be a lot nicer to everyone. Some I haven’t seen again since we graduated. According to some of the records that have been kept by this class, at least 42 of our classmates have already deceased. To me that just seems unreal.

We plan on meeting again on Saturday, March 7, at 2 p.m. We will meet upstairs over the Whitesburg Fire Department. There are lots of our classmates we really don’t know how to reach. So, if any of your siblings or children or other family members attended Whitesburg High School with this group, whether you graduated with us or not, and would like to participate in this reunion you can contact me on Messenger or Facebook. My cell phone number is 606-634-8439, but I would prefer you text me instead of call me. Others you can contact are Shelby Wynn, Perry Fowler, Jennie Combs Bentley, Vickie Frazier Caudill, Rosalee Holbrook Gilliam, Edwena Stallard Sexton, Sondra Holbrook Phillips, or Pam Sexton Taylor. 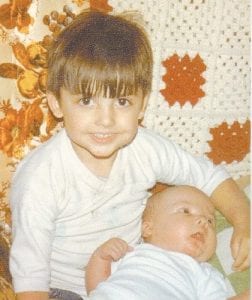 Kenneth Dwight Holbrook II (aka Little Ken) is with his brother Steve Man.

Last week I forgot to mention our Letcher County Senior Citizens birthdays and I even had Carmen to print them out for me. They are Robert Sexton on the second, three had birthdays on the sixth, Debbie Baker (our director), Lawton Sexton and Lorraine Kuracka. Bruce Sturgill celebrated on the 10th, Rose Hammonds will be on the 12th, Katie Caudill on the 16th, and Cathy Hicks on the 25th.

Other birthdays round and about were Libby Smith on the fifth, Judy Craft on the seventh, and my nephew Little Ken Holbrook. 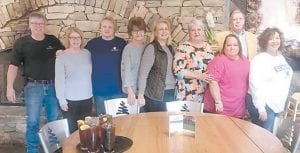 Little Ken is the oldest son of my baby sister Delores Tacket Holbrook and her husband Kenneth. He’s also Mom and Dad’s oldest grandchild. I was pregnant with my daughter, Joy Yonts Hampton, when Little Ken was born. I would spend as much time as I possibly could at their house just holding him. I just couldn’t get enough of him. He was one of those babies that had those jaws you just wanted to pinch and pinch. He looked like a chipmunk that had filled his jaws so full of nuts you thought they were going to pop. Once someone asked him what his name was and he told them “Little Ken”. They said, “I bet your daddy’s name is Ken.” He asked Delores, “How did they know that?”

It was so good to get to talk to Larry Hatton at the rec center Monday. He looks like a new person rather than the one I saw back last spring. He said he felt so much better, too. We also talked quite a bit about his mom, Oma Hatton. Mom surely does miss her, as I’m sure her family does, too.

It’s also good to have Maxine Quillen walking her three miles at the rec center in the mornings. The day after she came home from the hospital she was right up there on the walking track. Janice Foster has also been released from Letcher Manor Rehabilitation Center and is back where she belongs with the seniors.

Speaking of the senior citizens, this Wednesday beginning at 9 a.m., we will once again be having a fundraiser. My pastor’s wife, Sandy Jones, and I will have our Paparazzi jewelry for sell in the lobby. Each piece will be $5.50 and $1 of that will be donated to the Letcher County Senior Citizens general fund. We will have lots of items for Valentine’s Day. We would love to have you come shop with us!

I’m really beginning to think my phone is actually listening to conversations I have with people face-to-face, not online. My husband and I have had so many conversations and then in just a few minutes something will pop up in my news feed about what we were talking about. I’m wondering even if they can’t read our minds sometimes, because there are times it’s just things I’ve thought about and not voiced aloud. My sisters and I have had this conversation many, many times. Daddy used to say we’re just getting too smart for own breeches.

That reminds me of something that happened one time with their new caller ID telephone. Caller ID phones had been out quite awhile before they actually needed or wanted one. It was about 1994 or so and he had called and wanted us to come down there and help them with the phone. Well, it looked fine to me and so I asked him what was wrong with it. He said, “No matter what I do that name and number just stays on there.” I looked at the display and it said John Smith 888-888-8888. My daughter just reached down and lifted up the little piece of plastic that protected that display and pulled it off. Daddy just looked up at me and said, “Jeanette, you are surely raising a genius!” Mommy still has that same phone to this day.

Please remember Sandra Sexton Wilson in your every prayer. Also, remember her brothers and sister and their families. I also have a good friend from Senior Citizens that needs your prayers, Iona Noble. My husband’s brother, George Yonts, and his wife Ruth also need your prayers. My cousin John Adams is having a lot of problems with his back and has surgery planned. His brother Larry Adams also needs our prayers. There are so many people in our community and families that seek our prayers. Never forget to pray for my pastor, Bill Jones, and his wife Sandy in the death of their son, Bobby Jones.

Do me and Oma Hatton a favor and go to church Sunday morning, Sunday night, and Wednesday night.