Why ‘best’ lists are dominating TV 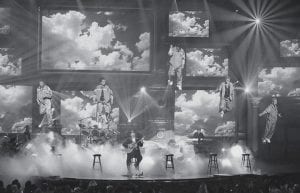 LIST MANIA – The five members of vocal group ‘N Sync were lifted into the air by wires as they performed with guest artist Christopher Cross, seated, during his song “Sailing” in this 1999 file photo. The Cross rendition topped VH1’s recent “40 Most Softsational Soft-Rock Songs” list. (AP Photo)

You’ll know television’s mania for lists has gotten completely out of hand when C-SPAN counts down the 100 greatest Senate filibusters.

Maybe that moment is closer than we think. Lists have become such a popular television format that even The Weather Channel offered the “100 Biggest Weather Moments” this spring. Can “50 Toughest Conference Committee Leaders” really be far behind?

List programs are the potato chips of programming: snack food for the mind that tastes good, has virtually no nutritional value and is impossible to resist.

No one can watch, or produce, just one.

“People just have an insatiable appetite for putting things into categories and ranking them,” said Bernie Kaminski, supervising producer at VH1. “People will debate about the greatest anything, from who was the greatest basketball player to who makes the greatest cheeseburger.”

Lists have been a reliable staple for magazines and other publications for years, but it wasn’t until VH1 polled musicians a decade ago to come up with the “100 Greatest Artists of Rock ‘n’ Roll” that things really took off on TV.

But they pay the bills.

We came up with our own list of the “5 Biggest Reasons TV Lists Are Hot! Hot! Hot!” Did you think we’d be able to resist?

5. Surfability. Perhaps no TV format is better designed for the 100-channel universe, when you point the remote control and hope something catches your eye. Light upon one of these lists at any time and it’s easy to figure out what’s going on and get engrossed. Who needs to turn on a brain to watch “101 Juiciest Hollywood Hook-Ups” or “50 Shocking Confessions” on E! Entertainment?

Even more frightening, the longer you stay with E!’s “25 Most Memorable Swimsuit Moments,” the more you might actually care where they ranked a shirtless shot of Matt Lauer.

4. Storytelling. The best list specials tell us things we didn’t know, even if it’s not particularly groundbreaking. The “100 Biggest Weather Moments,” for example, told how air conditioning and windshield wiper blades were invented. No one wants to spend an hour finding out what happened to that child star from the 1980s, but two minutes seems a worthwhile investment in time.

“The whole idea is to tell a story we haven’t heard before,” said Lisa Berger, programming chief for E! Networks, “and that’s tricky.”

3. Repeats. Once VH1 annointed Molly Ringwald the greatest teen star, it would stand to reason that no one would want to watch the list again. Not so. Lists do very well in repeats, great for networks with many hours to fill. E! has shown “101 Biggest Celebrity Oops!” 52 times, at last count. Some lists get higher ratings in reruns than in original airings.

How many times does Oxygen plan to run “The 50 Funniest Women Alive”?

“A thousand,” Beece joked. We think.

2. Cheap Stuff. It doesn’t cost much to pull tape and line a few comics or industry sages up to riff on camera about memorable moments. Many of these lists are just concocted by network employees gathering in a back room and tossing ideas around.

They take it seriously, too; VH1’s Kaminski still remembers the fierce argument over whether “Macarena” or Soft Cell’s “Tainted Love” should be considered the greater one-hit wonder. (He argued for “Macarena” and won.) There was a huge fight behind the scenes at E! over whether it felt right to have Anna Nicole Smith lead the list of “50 Shocking Celebrity Scandals” when she had worked for the network. She was chosen anyway.

Not everything is cheap, Kaminski said. Networks can run up bills paying licensing fees for songs. Still, it’s a lot easier than creating a drama or comedy from scratch and paying for the writers and actors.

1. Ratings. Duh! Why is anything done on television? People watch. While some lists do better than others, executives say they almost always improve upon typical fare. Oxygen’s comedy special boosted its Saturdaynight ratings by 50 percent and it’s on the lookout for more lists. (Ellen DeGeneres was picked as the funniest woman alive, by the way.)

Terry Connelly, senior vice president and general manager of The Weather Channel, figured it would work for him, too. He was right. Now The Weather Channel is doing more lists on a smaller scale – windiest cities, cloudiest locations, etc.

“Pretty much every cable channel is doing them,” Kaminski said. “It makes us work harder to find the ones that we can do that nobody else can do.”

C-SPAN is still a holdout, though. Nothing in the works there, a spokeswoman said.

So far. David Bauder can be reached at dbauder@ap.org