Why do our kids have to move away? 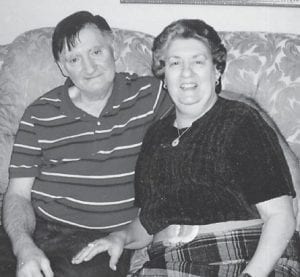 Hello everyone, it’s me again. Hope you are doing well and enjoying the pretty weather. We are thankful and relieved we didn’t get the tornado we were threatened with. It looked to be bad there for awhile.

Linda P. Hall wanted to wish her baby brother, Billy Ray Pennington in Cleveland, Miss., a late happy birthday. It was April 28. Also, a happy birthday from me. I watched you grow up.

I enjoyed a long talk from my old Marlowe friend, Bertha (Page) Dye in Floyd County. If you are from Marlowe and your nose itched, it was us talking about you, all good stuff. We don’t know any bad to say, and we wouldn’t have said anything bad anyway.

I got a call from Ellis Caudill of Lexington, formerly of Whitesburg. His wife, Ruby (Adkins) Caudill is trying to locate a grave where her sister, Minnie Ruth Adkins, is buried.

He thinks it is somewhere around Caudill Town. It’s been many years ago. I thought it may be across the hill from Rite Aid. There was a cemetery there that had to be moved when the new highway came. They had to move the graves, and some were moved to Green Acres. It’s been so long ago. I told him I would see if anyone knows anything about it. 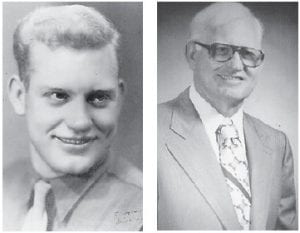 Former Army S/Sgt. Charles Ray Peters (pictured at left in the 1940s and at right today) will celebrate his 90th birthday in September. He entered military service December 23, 1942, and his specialty was provost sergeant. He served in battles in Normandy, northern France, Rhineland and central Europe. He received the Bronze Star Medal, Good Conduct Medal, European African Middle Eastern Theater Ribbon and World War II Victory Ribbon. He returned home to Virginia in 1945, and work brought him to Whitesburg in 1969. He has two sons, Frank and Jim Peters, and was married to the late Kathryn Back Peters.

She was a small child, killed by a train in Marlowe.

If there’s anyone who knows anything about old cemeteries, would you get in touch with me? 633-7120. I would like to help them.

I sure enjoyed hearing Eddie Street sing and preach at Calvary Temple where Bro. Conard Profitt is pastor. I really enjoyed sitting with my old Marlowe friends, Dorthy Tacket and Linda Hall, the Pennington sisters.

We go way back as children — so far back! — but we keep in touch. I like to keep all my friends.

I talked with my brother, Hillard Howard, in Florida. He and his wife Marsha are doing okay. They are happy there, but I wish they hadn’t moved away. I hope they miss us like we miss them. I’m sure they do.

Louise Shepherd and all her family got together in Norton, Va., to celebrate her birthday last Saturday, Shannon Banks, Jerry Shepherd, Pam Gardner and Carol Day, and also Jerry’s daughter, Lindsey and her baby. They all reported a great time. Louise, I didn’t give your age. You may call her and find out.

All of us sisters will get together and celebrate next week. We always enjoy that.

Aggie Hatton is still not doing well. She’s in Letcher Manor for rehab. She needs prayer.

I hope that Rose Ballard and Emma Lou Engle and all the rest of the writers are doing well. I love reading all of their news. They have so much to write about.

There isn’t much going on around here and I really don’t get out much. I have been doing some outside work so that I could be outside. I’d rather do outside work than inside. I really don’t like housework. I attack it sometimes, but not often enough.

Our church had a really good revival, and I missed it when it was over. Our church is having a picnic on May 6 at Carr Creek Lake. I won’t get to go as my son Larry Hatton has a doctor’s appointment on May 4, and I’m going down with them and visit with my son Astor and wife Rosemary. They live in Georgetown, and I haven’t yet seen their house. I know they love it so I will too, and I’ll enjoy seeing them also.

Why do our kids have to move away? I think it’s a little thing like jobs. I can understand that.

Sandra and Billy Hatton are at their lake house this week. I knew they are enjoying that.

Well, I’ve rattled on long enough, so I will stop and get ready for church.

May God bless all of you. Try to be in church somewhere this week is you are able.