Why drop in oil prices can hurt economy 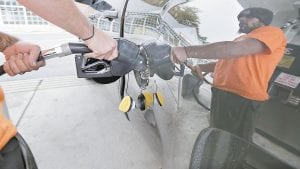 Dana Ripley, of Winthrop, Mass., filled the gas tank of his truck at a service station in Andover, Mass., recently. A swoon in the price of oil is lowering fuel bills for drivers, shippers and airlines, but it is not without downsides for both the U.S. oil boom and the broader economy. (AP Photo)

If you’re a driver, a shipper or an airline, low oil prices sure feel nice. But there are downsides to the recent plunge in oil prices — for the oil industry and for the economy.

Low fuel prices can help boost economic growth by reducing fuel bills and leaving consumers and companies with more money to spend on other things. Problem is, two factors behind the oil-price drop — a weaker global economy and a stronger dollar — could hurt the U.S. economy by reducing exports, employment and spending. And all that, in turn, could outweigh the economic benefit of cheaper fuel.

“Initially, (a lower oil price) will provide a boost to an economy that already has some momentum,” says Diane Swonk, chief economist at Mesirow Financial. “It’s like a tax cut. The problem is that it will come back to haunt us in 2015.”

A boom in U.S. oil production, which has helped reduce dependence on foreign oil, has been propelled by high prices. Drilling in some areas of North Dakota and Texas, for example, produces only a slight output per day. If prices fell further, drilling would have to slow because it would no longer be profitable.

Oil hasn’t fallen quite far enough for that to happen, analysts say. Even the more expensive drilling operations are still profitable when oil sells for $85 a barrel, and oil closed just below $86 on Monday. In general, oil companies would have to expect oil prices to stay below $80 a barrel for many months to scale back their drilling plans.

Unless supplies drop, perhaps from a cut in production from Saudi Arabia or OPEC, or a sudden turnaround in the global economy that would increase demand, prices could fall further.

“It’s problematic,” says Gary Ross, CEO of PIRA Energy Group. “The wake- up call is on its way.”

In the meantime, drivers will be enjoying the lowest gas prices in four years. Tom Kloza, chief oil analyst at the Oil Price Information Service and Gasbuddy.com, says the national average could fall under $3 a gallon before year’s end for the first time since 2010.

Global supplies were unstable, and demand appeared robust. U.S. refiners were churning through more oil than ever and making and exporting records amounts of fuel.

The picture soon flipped. The threat to Iraq’s exports diminished. Libyan exports returned to the market. And refineries in the U.S. and Asia slowed for seasonal maintenance. At the same time, slower growth in Europe and China led forecasters to reduce expectations for oil demand.

The weak global economic forecast, combined with a relatively strong one for the United States, raised the dollar’s value to a fouryear high against other currencies. Because oil is priced in dollars, a stronger dollar makes oil more expensive and tends to reduce demand.

Suddenly there was plenty of supply and not enough demand. By the end of last week, oil had plunged $20 a barrel from its peak. It ended the week below $86 a barrel for the first time in nearly two years. Energy company stocks have fallen 16 percent since late June, compared with a drop of 2 percent in the Standard & Poor’s 500 stock index, according to FactSet.

Lower fuel prices have followed. The average prices of gasoline, heating oil, diesel and jet fuel are all on track to be the lowest in four years, giving drivers, travelers and fuel-hungry companies a break. Savan- thi Syth, an airlines analyst at Raymond James, recently increased her earnings forecast for United Airlines by 31 percent for the fourth quarter because of lower fuel prices.

When energy prices fall because of rising supplies, it can help the economy. U.S. natural gas prices fell even as the economy was recovering from the financial crisis. Those lower prices helped manufacturers by lowering electricity prices and raw material costs.

And increases in U.S. oil production have protected the U.S. economy by keeping fuel prices from soaring in recent years during a period of turmoil in the Middle East.

But a sharp fall in energy prices often results from weakening economic growth, and the benefit of lower fuel costs isn’t enough to offset it.

The lower global economic growth that’s pulling down oil prices and U.S. stocks will also squeeze U.S. companies. The stronger dollar can hurt the U.S. economy because it makes U.S. goods costlier than foreign goods, so exports fall and imports rise. That can reduce domestic economic activity and job growth.

Some attribute the price drop mainly to seasonal factors and expect OPEC to cut production to help send oil prices back up. At the start of the year, many analysts expected the 2014 annual average for oil to be $90 to $95 a barrel. The average is still above that despite the recent price plunge.

“The sky may be sagging a bit but it isn’t falling,” she said.