Why haven’t squirrels been after walnuts? 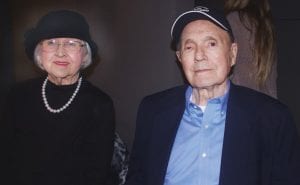 100 YEARS YOUNG – Dan and Penny Combs posed for a picture at his 100th birthday party last Thursday. Combs, who grew up in Letcher County and was a crew member on a bomber during World War II, wore a hat given to him for his birthday that said “Not everyone looks this good at 100.” Family and friends threw a party in his honor at Streetside Bar and Grill.

It didn’t feel like the ink could have dried on last week’s paper before I had e-mails from some friends scattered hither and yon.

Jimmy Robinson, Bob Kennedy, Mike Caudill, and Mike Majority promptly chimed in with suggestions after noting my whining that fodder for columns is getting harder and harder to come by.

I’m going to postpone writing about Kennedy and Majority until it gets a bit closer to Christmas, but retired Perry County education administrator Mike Caudill, who lives in Carcassonne, sent a quote that can’t wait. One of his department heads, apparently getting on in her years, once told him that “Arthur is the very worse one of those ‘Itis’ boys!”

I’m not so sure about that. His brothers, Buris and Prostate, both raise a lot of hell at my place and give Ole Arthur a run for his money. My late uncle Stevie Craft would have told you their sister Rheumy was also pure evil.

Meanwhile, Jimmy Robinson, the chief executive officer of Robinson’s Sausage and Premium Meats Company located in London, is an astute observer of nature who stays in touch several times a year. Jimmy is one of the few people, in my acquaintance, who has been able to attract orioles to his hummingbird feeders and he is consistently the first person to tell me every spring when his hummers have returned.

However, Jimmy’s “column fodder” suggestion has to do with an observation he hasn’t had in several years, and now that he has mentioned it neither have I. The question is: Why haven’t squirrels been scurrying around to pack off walnuts as soon as they hit the ground this year?

A lady comes to our place on Charlie Brown Road in Paint Lick every fall and normally hauls a pickup truck load of walnuts that she takes to market. This year she hauled off two full loads and there are still a bunch lying around the yard. I’ve seen exactly two squirrels harvesting walnuts on a regular basis at our place since September. I usually see a dozen or more.

The walnuts frequently fall onto our driveway or out onto the roadway and get crushed by automobile tires. I’ve seen far more blue jays than squirrels making daily meals of fresh walnut kernels.

Jimmy says the squirrel situation is the same at his home, at Helvetia, where he has a 300-acre farm/wildlife preserve. The squirrels simply aren’t packing a lot of walnuts, at least near his home, as they usually do. I didn’t ask how they were doing out on the farm. Three hundred acres covers a lot of territory!

Ordinarily, I would say that lazy squirrels in autumn was a sign of a very mild winter ahead, but the wooly worms are claiming we are due the baddest one we’ve had in over a decade.

I do know that this year produced the largest walnuts I’ve ever seen grow. I attribute that to the fact that we also had one of the wettest growing seasons in central Kentucky history. The outer hulls of locally grown walnuts were much thicker than normal, and that is why the lady who hauls them off from our place had to make two trips.

I’ve also noticed the largest acorn and hickory crops that I’ve seen in our neck of the woods in many years. I’m not so sure whether there are more nuts or that they are simply much larger than normal.

In the meantime, this makes well over 20 consecutive years that we have received a big Robinson country cured ham from Jimmy. If there are any better ones out there, Loretta and I have not tasted them. Loretta’s ham preparation should be good for one more column.

And, if you have any ideas for subjects that you’d like to see in this column, please don’t hesitate to get them to me. Captain Mike Majority should keep me busy until Christmas.