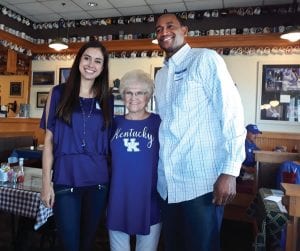 Maci Morris, left, and Reggie Hanson both could have easily left UK during some difficult times but stayed and both are fan favorites. (Larry Vaught Photo)

Maci Morris’s freshman year at the University of Kentucky was everything she “hoped for” and the coaching staff literally had to make her go home during breaks because the dorms closed.

However, the next year there was a “little bit of craziness” that led to six players transferring, one player being dismissed from the team, two assistant coaches resigning, one assistant getting fired and two recruits de-committing during the 2015-16 season.

Reggie Hanson played two seasons at Kentucky for coach Eddie Sutton before the program imploded in 1988 and was placed on probation after the 1988-89 season. Hanson could have transferred and been eligible to play immediately.

Morris and Hanson played at Kentucky almost 30 years apart. Hanson came to UK from Pulaski County, Morris from Bell County. Both made the same decision to stay at UK rather than bail out on the Wildcats.

“My sophomore year we only had six players on scholarship,” Morris said. “We needed tryouts just to get players. But my sophomore year was my favorite year at UK. We had to push beyond what we knew we could do. 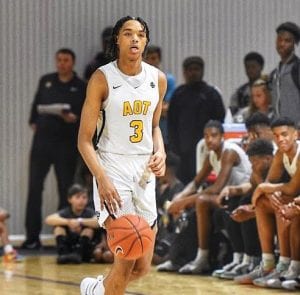 Rivals.com’s David Sisk says recent UK basketball commit Brandon Boston is the kind of player who could help get other players to Kentucky. (LakePoint Basketball Photo)

“We became sisters and got so close. We knew we had to give everything to be successful. We made the NCAA and won a game in the tournament after a lot of people counted us out going into the season.”

The defections took a huge tool on UK the next year and UK didn’t make the NCAA.

“People thought UK was going down the toilet pretty much,” Morris said. “I was not used to losing like we did. It was very hard on me. A lot of stuff was going on in the locker room. But my senior year we came back and made the NCAA and won a game. Now they are moving back in the right direction and I am really proud of the team.”

Hanson admits a lot was going through his mind during the NCAA investigation and he wasn’t sure immediately whether he would stay. His younger teammates could not transfer without sitting out a year. Hanson was the team’s only sophomore eligible to transfer and play immediately.

“I had to think about what I wanted to do,” Hanson said. “My goal, like every player, was to play in the NBA. To do that I needed TV exposure. I needed to play in the SEC Tournament and play in the NCAA Tournament. With probation, I lost all three things if I stayed at Kentucky.”

So why did he stay?

“I did make a commitment to Kentucky. I didn’t expect that kind of adversity, but that is part of life,” said Hanson, who now lives in Tampa and works in the retail industry. “I had to think about sticking to my commitment and being part of turning the program around or bailing and being selfish and trying to accomplish individual goals.

“I stayed. I felt like I would feel a lot better if I stuck with the university and helped the team get back on its feet.”

His new coach, Rick Pitino, often said Hanson was his most important recruit because he helped hold the program together. In Pitino’s first year UK won 14 games. The second year the Cats added Jamal Washburn and Gimel Martinez and won the SEC championship (the following year The Unforgettables lost to Duke in the NCAA Elite Eight).

“My senior year was so much fun. We went to Italy (on a summer exhibition trip), went to the Virgin Islands (for a holiday tournament). We had a winning season,” she said. “The next chapter in my life will now be playing professionally in Italy starting sometime in August hopefully.

“I owe everything I have and everything I am today and the opportunity to go overseas to UK. UK has opened so many doors for me. I have met unbelievable people.”

Morris and Hanson both agreed that the UK fans were special. Hanson saw UK fans in Japan when he played and coached there.

“You guys are the best fans in the world and you don’t know how much mean to athletes,” Morris said at the recent Ohio UK Convention. “You guys really help us and make us want to win for you because you are always there supporting us. We are truly thankful to you guys. All I can say is thank you to UK and the fans for four wonderful years.”

“He is definitely a scorer, can handle the ball and he has size. He’s a long 6-7, 6-6 2 guard,” David Sisk of Rivals.com said. “Corey Evans (of Rivals) has seen him play more than me and he thinks he can even play point guard. He has the type of flexibility to play anywhere from 1-3. It has just got to the point even in college basketball if you have a 6-4 guard and a 6-7 guard and they can basically do the same things, the 6-7 guy is obviously a lot more coveted. Boston is like that and can play different positions kind of like (UK freshman) Tyrese Maxey.”

There could be one other huge plus in getting Boston to commit like he did last week after his official visit. Several players — including Jalen Green and Josh Christopher — have both openly talked about playing in college with Boston.

“If Boston can play more than just the 2 guard and then Green and Christoper can do the same thing, then they can all play together,” Sisk said. “They are all more than just shooting guards. Getting Boston early like this gives John Calipari some flexibility in recruiting now for the position less basketball he likes.”

What draws players — more than Green and Christopher have talked about playing with Boston in college — to the UK commit?

“Tyrese Maxey is outgoing but he is the same way if it is the first time he has met you or you are his best friend. He was always like that,” Sisk said. “Boston, to me, is a little bit quieter when you see him in the (media) interview process. But around players more his age, he a lot more like Maxey. He’s got connections with a lot of players, including Terrence Clark who is one of the best players in the 2021 class and might reclassify to 2020.

“It seems like the buzz this year is around some of the guys like Boston, Green and Christopher all playing together in college. This definitely gives Kentucky a big plus getting Boston to commit.”

Christopher and Green both play in California. However, Boston is transferring to Sierra Canyon in Chatworth, Calif., for his senior season where he will be playing with several other elite players. Zaire Williams, another top 10 player, recently transferred there for his senior season. Also on the team will be sophomore Bronny James, the son of LeBron James, and senior Zaire Wade, the son of Dwayne Wade.

“I had been a little nervous when he transferred to Sierra Canyon because naturally when a school (UK) is a frontrunner for a player and he moves across the country it makes you wonder. But I had always thought Kentucky was in great shape with him,” Sisk said.

Getting to be in a Super Bowl commercial promoting Kentucky football after its 10-win season last year was “pretty cool” for UK senior linebacker Kash Daniel.

“I’m glad they let me start my acting career with that. It was pretty fun,” Daniel said.

He explained at SEC Media Days that he asked the crew filming the commercial how expensive their cameras were.

“He said this camera right here made ‘Avengers Endgame,’ and I said that’s a lot of money right there. So, I knew it was a pretty serious production,” Daniel said. “We were there for about four or five hours just because of how many takes we got to do.”

Daniel said he got a lot of “really good feedback” from fans about the commercial.

“We had that promotional video where I said for people to watch it and video it and tape their reaction. We got a bunch of reactions and it was really fun to see little kids and their parents making out ‘C-A-T-S Cats, Cats, Cats’ watching the video and screaming hard in the living room,” Daniel said.

He’s expecting more fans to likely mention it to him Saturday during UK’s Fan Day at Kroger Stadium.

“But I’m not sure in the SEC or across the nation if he really gets all the credit he deserves for what he’s done,” George, who played against UK, said.

“When I was in high school you could tell the Kentucky program was trending in the right direction,” George said. “He has built an unbelievable program. They are constantly in the top 25 and a national championship contender. That’s just a testament to him and his recruiting ability. Now Kentucky is a destination for a lot of people because it has been good for so long.”

Before she left Milwaukee, she was attending a major sports award program in Wisconsin when a high school girl came up to her.

“She introduced herself and said, ‘I know who you are because of volleyball.’ I was sure she was going to know me from the Bucks,” George said.

She told George she was going to Kentucky to play for Skinner. The player was defensive specialist Maddie Berezowitz.

“I just told her she picked a great university and program to play for. We talked volleyball for the next 20 minutes,” George said. “She was so excited and that’s just a testament to what he (Skinner) has done at Kentucky.”

Quote of the Week: “I think he’s not really even scratching the surface. I think he’s got tremendous makeup, and that’s a big — I think that’s going to be a big accelerator for ultimately how good a player he becomes, and I think he has that. He’s got great size and great length, and he’s a sponge,” Oklahoma City Thunder general manager Sam Presti on getting Shai Gilgeous-Alexander in a trade.