Why some are hesitant to get the COVID shot 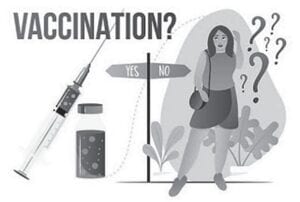 In a society that gives out trophies for participation, it’s only natural that the U.S. is celebrating that about a third of its population is fully vaccinated against the coronavirus and 43% have received at least one dose of a vaccine.

But hold those trophies, public health officials might say, because we have a ways to go before we reach herd immunity that will offer a level of protection for those who can’t or won’t get a vaccine — and to keep the virus from spreading and mutating, perhaps into more contagious variants.

Vince Venditto, assistant professor in the University of Kentucky College of Pharmacy, told Kentucky Health News he likes to call herd immunity “community immunity” because that better describes what that term actually means and doesn’t invoke an image of cattle.

Herd immunity occurs when a certain percentage of a population is protected against a disease, either through vaccination or infection, providing significant protection for people who are either unwilling or unable to get vaccinated. Health experts aren’t sure, but say a vaccination rate of 75% to 80% is needed to reach herd immunity for the coronavirus.

So, right now the U.S. is not even halfway to herd immunity, and Kentucky’s even farther from it, with with only 29% of the state’s population fully vaccinated and 39% having received at least one dose of a vaccine.

Whether the nation or Kentucky are able to meet that goal remains uncertain, since vaccination rates are dropping, the percentage of people not returning for a second shot has gone up, and a persistent 13% of people say in polls that they won’t get vaccinated, no matter what.

The Kaiser Family Foundation Covid-19 Vaccine Monitor found in March that Republicans, white evangelicals and people in rural areas were most likely to say they would “definitely not” get the vaccine, but the poll report cautioned that “no group is monolithic in their vaccine attitudes.”

What that boils down to is that there can’t be a one-size-fits-all approach to get the 17% of people who said in the Kaiser foundation’s poll that they would “wait and see” before getting vaccinated. Venditto and the foundation say it’s important that this group hears messages from trusted sources.

“If somebody doesn’t trust the information that is available on what I believe are very trusted sources, I don’t know that you can convince them without sitting down and connecting with them on a personal level,” Venditto said. “I think the challenge that we face as a society is getting enough of those people, leaders in the community, to actually sit down and serve in that capacity.”

The Biden administration it offering tax credits to employers for paid time off, and Kentucky and some other states are slowly moving away from mass vaccination and scattering vaccine supplies among local providers.

Kaiser’s polling found that the No. 1 reason people gave for their hesitancy were concerns about potential side effects, including missing work because of them. Other concerns reflected a lack of easy access to the vaccine, often related to transportation or the desire to get it from a trusted provider. Others said they had a lack of accurate information.

Here are some common reasons given for not getting vaccinated, along with what medical and public-health experts say.

“The vaccines were created too quickly.” They were created and approved in less than a year, by far a record, but it wasn’t as rushed as it seems. Drug companies used research that had been in place for several decades along with “technical expertise, urgency and financial resources” from the federal government, Kaiser Health News and PolitiFact report in detail.

Added to that was the willingness of tens of thousands of Americans to take part in clinical trials that showed the vaccines work. They numbered many more than studies done for many licensed vaccines, which have had as few as 3,000 participants in their clinical trials, said Dr. Ruth Karron, director of the Center for Immunization Research at Johns Hopkins University.

The U.S. Food and Drug Administration has firm guidelines that it has to follow before it can approve a vaccine for emergency use, the current authorization for all three vaccines used in the U.S.

“I’m going to wait and see before I get a vaccine.” Through April, Americans had taken more than 240 million doses of vaccine. Only two serious health issues have reported after vaccination, and both are rare, says the CDC.

“A small number of people have had a severe allergic reaction,” anaphylaxis, after vaccination, the CDC says. Because of this, anyone getting a shot is asked to stay at least 15 minutes afterward for observation, and vaccinators have medications available to immediately treat this reaction.

And after receiving the Johnson & Johnson vaccine, 15 women out of 7 million people who took the one-dose vaccine had an unusual type of blood clots with low platelets. Use of the vaccine was paused for a little over a week, but federal officials declared it safe for use, with a caution for women of child-bearing age. The CDC notes that the problem occurred at a rate of about seven per 1 million vaccinated women between 18 and 49, and “for women 50 years and older and men of all ages, this adverse even is even more rare.”

What about long-term side effects? They are unlikely from the vaccines, the CDC says, because side effects generally happen within six weeks of receiving a dose, and the FDA required each of the vaccine recipients to be monitored for at least eight weeks after the final dose. “Millions of people have received Covid-19 vaccines, and no long-term effects have been detected,” says the CDC.

• The Pfizer-BioNTech vaccine is 95% effective in preventing Covid-19 in those without prior infection and 100% effective at preventing severe disease.

• The Moderna vaccine is 94.1% effective at preventing symptomatic infection in people in those without prior infection. The efficacy rate dropped to 86.4% in people 65 and older.

All of these vaccines protect against the highly contagious B.1.1.7 variant, which was first detected in Great Britain and is now the most dominant strain in the U.S.

“I’m worried about the side effects.” Common side effects from the vaccines include pain, redness and swelling at the injection site, and tiredness, headache, muscle pain, chills, fever and nausea throughout the rest of your body. Many if not most people have no side effects at all.