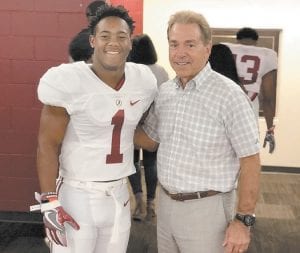 Kentucky high school standout Wandale Robinson will make an official visit to Alabama. He was there during the summer when he met with coach Nick Saban and this photo was made. UK is also in the recruiting battle for Robinson. (Twitter Photo)

Just in case Western Hills football star Wandale Robinson didn’t know how big a recruiting priority he was for Kentucky, he found out Friday night.

That’s when Kentucky head coach Mark Stoops came to watch him play and got to see plenty, including a 96-yard punt return for a touchdown in Western Hills’ win over rival Frankfort.

The 5-9, 175-pound Robinson is ranked as one of the nation’s top five all-purpose backs and ranks among the top 350 players overall. He’s narrowed his college choices to Alabama, Ohio State, Michigan, Purdue, Nebraska and Kentucky.

In last week’s 41-23 win over Frankfort, he ran 21 times for 242 yards and two scores, returned a punt 96 yards for a touchdown, caught a 21-yard scoring pass, made six tackles, had one tackle for loss and break up two passes.

“His recruitment has been pretty busy,” said Western Hills coach Don Miller. “Coaches have been just coming in one after another. He had about 25 (scholarship) offers but he narrowed it down. He’s been to Nebraska (for an official visit) and is going to Alabama for an official (on September 22).”

Robinson, who was at Kroger Field Saturday with his father to watch UK beat Murray State, has explosive speed that allows him to make big plays. But Miller said it is more than just straight-ahead speed that makes him special.

“The biggest thing is his lateral speed and the way he can just cut on a dime,” Miller said. “He has great vision. He is very versatile running laterally and his straight ahead speed is amazing. He has such a great football IQ that we can move him around. He’s even played some fullback. We can put him in different positions and that makes it harder for the defense to focus all the attention on him.”

Robinson has not let the recruiting attention overwhelm him. During the summer he went to Ohio State to meet with the coaches, drove to Florida State and came back through Alabama where Miller said he “held his own” with others also on the Alabama campus.

“Recruiting has not changed him. The best thing about him is when a coach comes in Wandale always has a smile on his face,” Miller said. “It doesn’t matter who the coach is, he has that same smile and personality. He has listened to every coach the same way and shown every coach the same respect.”

Kentucky started selling Robinson on what playing for the Wildcats could mean to him for years. At first it was offensive line coach John Schlarman selling the message. Then Stoops and recruiting coordinator Vince Marrow became UK’s lead recruiters with him.

“They are telling him not to look at just four years at Kentucky but to look at the opportunities he would have after playing at Kentucky,” Miller said.

“I don’t think it is because Kentucky is doing anything wrong,” Miller said. “I think as a whole, the Kentucky football program has really stepped up.”

He noted that in Western Hills’ district that UK has offered Lexington Catholic junior quarterback Beau Allen and Boyle County junior cornerback/running back Landen Bartleson along with Robinson.

Robinson could make his college choice in October but he’s already working to make sure he can graduate in December so he can enroll in college in January.

“I love the kid and wish him the best. There’s not going to be a wrong choice for him and somebody is going to get a great player and great kid,” Miller said.

. Kentucky fans might not remember how Benny Snell did against Mississippi State last year, but I am betting the UK junior running back does.

He managed just 18 yards on seven carries in the 45-7 loss to the Bulldogs. Backup A.J. Rose ran for 26 yards and Sihiem King even ran for 24 yards. Quarterback Stephon Johnson led Kentucky with 54 yards as the State defense took Snell out of the game plan.

In three games this season, Snell has rushed for 375 yards and three touchdowns. His 125 yards per game rank second in the SEC.

“I am looking forward to it now,” Snell said last week after UK beat Murray State. “I know Mississippi State is good. They have a good defensive line. Their linebackers swarm to the ball. As an offense we are going to make sure we are prepared. We are going to be ready for them.

“They were swarming to the ball (last year). We were getting a lot of turnovers. Throwing interceptions, fumbling, just beating ourselves. This team this year we don’t beat ourselves. Or if we know by a quarter or halftime we make adjustments and we will keep moving forward. We’ll be ready.”

“The group is as deep and problematic from every direction,” Cubelic said. “They have a lot of good players inside and one the edge.”

Mississippi State’s Montez Sweat and Jeffery Simmons lead the league in tackles for loss with 5.5 apiece. State has not given up a rushing touchdown this season and is allowing just 2.5 yards per rushing attempt.

State quarterback Nick Fitzgerald threw for 155 yards and score last year and ran for 115 yards and two touchdowns. He’s back after helping State roll up 441 yards against UK last year.

During his first four years at Kentucky, David Bouvier played in six games — and had just one catch. The former walk-on was a seldom-used player, but this season he’s blossomed not only into a starter, but a key player for UK.

He had touchdown catches against both Central Michigan and Florida. After three games, he has five catches for 91 yards and is also the team’s starting punt returner.

So why didn’t Stoops notice and/or use Bouvier before, especially with the way Charles Walker, another former walk-on, performed at both receiver and returner?

“Chuck (Walker) was a tough guy to replace, reliable and just tough and you have to have a craft to play that inside position. David, we did recognize him before, but the opportunity to play … as I mentioned before, the ability to spread people out and play with three or four wide receivers comes from just being better across the board at throwing the football with protecting and throwing and creating plays,” Stoops said.

“So with that you get more opportunities, same with getting C.J. (Conrad) the ball and Lynn (Bowden) and David and others.”

Nobody can promote a basketball program like John Calipari. He got UK’s four exhibition games in the Bahamas on national TV. Now Kentucky’s Pro Day will also be televised from 7-9 p.m. on the SEC Network on October 7.

It was creative enough when Calipari came up with a preseason Pro Day to showcase his players to NBA personnel — and this year certainly every team will want to watch Calipari’s talented roster.

SEC Network’s Tom Hart and Seth Greenberg, who were with the Cats in the Bahamas, will be back in Rupp Arena for Pro Day along with former UK assistant coach Jimmy Dykes.

Fans will get to see the Cats go through agility and shooting drills during the practice as well as limited scrimmage situations.

Pro Day comes about one month before the November signing period and just gives Calipari one more way to reach this year’s recruits — as well as future recruits — that other schools cannot match.

And don’t be surprised to see Calipari spend some time on air with the SEC Network trio promoting his players in a way future recruits will enjoying hearing.

Tharp had a lot of Louisville fans around her growing up in Louisville. Most of them thought the former Mercy Academy standout should play her college volleyball for the Cardinals, but she committed to Kentucky as a high school sophomore. She also had offers from Nebraska, Ohio State, North Carolina and others.

“My family was really big UK fans so they were pushing me to go to UK. They were like, ‘You won’t get this opportunity to play for the school you love and cheer for again.’ My friends supported me, too, and said they would cheer for me when we played UofL,” Tharp said.

Kentucky did play Louisville last week and swept the Cardinals. It was UK’s sixth straight win over Louisville and certainly made Tharp happy. She grew up with UK posters in her house and says she had a “ton of UK clothes” for as along she can remember.

She had her favorite UK volleyball players, but also was a “huge” fan of basketball players Tyler Ulis and Devin Booker.

“I loved them both. That has not changed,” she said.

Quote of the Week: “Right now Kentucky looks like the second best team in the East. Georgia, Alabama, Auburn, LSU and Kentucky are the most physical football teams in the SEC,” SEC analyst Tony Barnhart.

Quote of the Week 2: “He is what you look like when you come into the SEC. He’s a big boy. He is forcing his way into the rotation. He’s 6-6 and tells me he is 330. He is a guy that came from a big-time program in Ohio that is always ranked. He is prepared for the big time games but I told him, ‘Dude, this is the SEC. This is a step up for you.’ But he was ready for it,” Kentucky recruiting coordinator Vince Marrow on freshman offensive lineman Darian Kinnard.

Quote of the Week 3: “As a mother you are always scared who the next influence in life will be on your child and taking my baby and handing him over to man you hardly know is not easy but I could not have hand picked a better person,” Amy Currens on her son, sophomore pitcher Mason Hazelwood, playing for Kentucky coach Nick Mingione.