Why the EPA was created 40 years ago

By DINA CAPPIELLO
The Associated Press 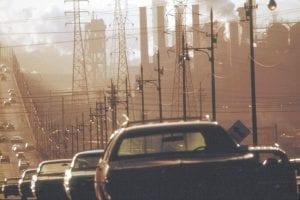 BEFORE — This July 1973 photo shows Clark Avenue and the Clark Avenue Bridge in Cleveland, Ohio, looking east from West 13th Street. The view is obscured by smoke from heavy industry. The image was taken as part of the then-new EPA’s program (1972-1977) to document subjects of environmental concern. (AP Photo/U.S. National Archives, Frank J. Aleksandrowicz)

A light-rail line zips past the spot where a now-defunct Portland, Ore., gasoline station advertised in 1972 that it had run out of gas.

A smoking Jersey City, N.J., dump piled with twisted, rusty metal has disappeared, along with the twin towers of the World Trade Center in lower Manhattan that were its backdrop.

Forty years after the Environmental Protection Agency sent an army of nearly 100 photographers across the country to capture images at the dawn of environmental regulation, The Associated Press went back this year to see how things have changed. It is something the agency never got to do because the Documerica program, as it was called, died in 1978, the victim of budget cuts.

AP photographers returned to more than a dozen of those locations in recent weeks, from Portland to Cleveland and Corpus Christi, Texas. Of the 20,000 photos in the archive, the AP selected those that focused on environmental issues, rather than the more general shots of everyday life in the 1970s. 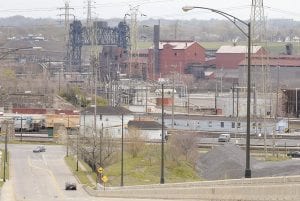 AFTER – This photo taken April 12 shows today’s view down Clark Avenue from West 13th Street in Cleveland, Ohio. The same view (in photo at top of page) was photographed in 1973 for the “Documerica” program (1972-1977) instituted by the new Environmental Protection Agency, to document subjects of environmental concern. (AP Photo/Amy Sancetta)

Gone are the many obvious signs of pollution — clouds of smoke billowing from industrial chimneys, raw sewage flowing into rivers, garbage strewn over beaches and roadsides — that heightened environmental awareness in the 1970s, and led to the first Earth Day and the EPA’s creation in 1970 (the 42nd Earth Day was held Sunday). Such environmental consciousness caused Congress to pass almost unanimously some of the country’s bedrock environmental laws in the years that followed.

Today’s pollution problems aren’t as easy to see or to photograph. Some in industry and politics question whether environmental regulation has gone too far and whether the risks are worth addressing, given their costs. 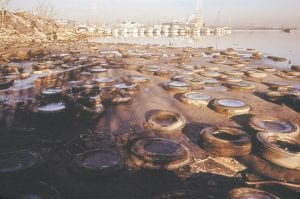 YESTERDAY — In this January 1973 photo released by the U.S. National Archives, trash and old tires littered the shore at the Middle Branch of the Patapsco River in the harbor of Baltimore, Md. This archival image was part of the “Documerica” project, begun in 1972 by the then-new Environmental Protection Agency. (AP Photo/U.S. National Archives, Jim Pickerell)

Republican presidential contender Mitt Romney has called for the firing of EPA chief Lisa Jackson, while GOP rival Newt Gingrich has said the EPA should be replaced altogether. Jackson has faced tough questioning on Capitol Hill so often the in past two years that a top Republican quipped that she needs her own parking spot.

“To a certain extent, we are a victim of our own success,” said William Ruckelshaus, who headed the EPA when it came into existence under Republican President Richard Nixon and was in charge during the Documerica project. “Right now, EPA is under sharp criticism partially because it is not as obvious to people that pollution problems exist and that we need to deal with them.”

Environmental laws that passed Congress so easily in Ruckelshaus’ day are now at the center of a partisan dispute between Republicans and Democrats. Dozens of bills have been introduced to limit environmental protections that critics say will lead to job losses and economic harm, and there are those who question what the vast majority of scientists accept — that the burning of fossil fuels is causing global warming. 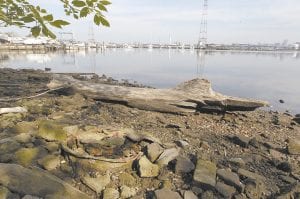 TODAY — This photo taken April 16 shows remnants of a tire and rim along the shoreline of the Middle Branch of the Patapsco River in Baltimore, Md. The photo was taken near the site of an historic photo taken during the “Documerica” project (1972-1977). (AP Photo/Patrick Semansky)

In the 1970s, the first environmental regulations were just starting to take effect, with widespread support. Now, according to some officials in the oil and gas and electric utility industries, which are responsible for the bulk of emissions and would bear the greatest costs, the EPA has gone overboard with rules.

For instance, Documerica photographers captured a wave of coal-fired power plants under construction. Republicans and the industry now say environmental regulations are partly to blame for shuttering some of the oldest and dirtiest coal plants.

Jim DiPeso of ConservAmerica, a group that recently changed its name from Republicans for Environmental Protection, says the EPA is caught in the center of a perfect storm. “This time of greater cynicism about government, more economic anxiety and the fact that the problems are not immediately apparent, has created this political problem for EPA,” he said. 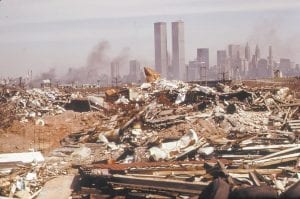 THEN — This March 1973 photo released by the U.S. National Archives shows an illegal dumping area off the New Jersey Turnpike. The site faced Manhattan across the Hudson River and north of the landfill area of the proposed Proposed Liberty State Park, N.J. (AP Photo/U.S. National Archives, Gary Miller)

In an interview, Jackson said she believes that people in the United States still want to protect the environment. “There’s a large gulf between the rhetoric inside the Beltway to do everything from cut back on EPA to get rid of the whole place, and what the American people would actually stand for,” she said. “It’s very easy to make rash statements without thinking about what that means to the health of everyday Americans.”

A 2010 Pew Research Center survey showed that 57 percent of those questioned held a favorable view of the EPA, compared with a 1997 poll that showed 69 percent with a positive view of the agency. A CNN/ Opinion Research Corp. poll taken last year found that 71 percent of people surveyed said that the government should continue provide money to the EPA to enforce regulations to address global warming and other environmental issues. 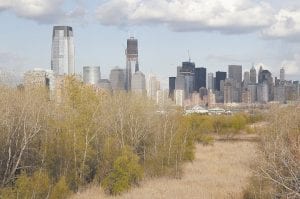 NOW — This photo taken Thursday, April 12 shows the Jersey City and New York City skylines with the green area near Liberty State Park in Jersey City, N.J. in the foreground. Before becoming a park, the area was a site where illegal dumping covered much of the empty land, as seen in photo at left. (AP Photo/Julio Cortez)

“We are not done. We still have challenges we have to face,” Jackson said.

The agency last year began a volunteer photography project called State of the Environment. More than 620 people have participated and submitted 1,800 photographs, but only a few are at the same sites at the 1970s project.

Images always have spurred environmental consciousness. A 1980s satellite picture of the ozone hole helped lead to a ban on the chemicals in aerosol cans and refrigerants that were responsible. Underwater video of oil spewing into the Gulf of Mexico in 2010 opened the public’s eyes to the gravity of the largest off- shore oil spill in U.S. history.

But a second Documerica project, with professional photographers, would be impossible today, given budget cuts facing the agency and the wariness of industry barring access by photographers.

Lyntha Scott Eiler, 65, shot photographs for Documerica around her thenhome in northern Arizona, as well as one of the early emissions testing sites for automobile exhaust in Hamilton County, Ohio. At the Navajo Generating Station in Arizona, Eiler got right down in a strip mine “where the shovels were.”

“They weren’t afraid of the EPA, so it was, ‘What else you do you want to get a photograph of?,’” Eiler said. “You probably would have a hard time doing that today.”