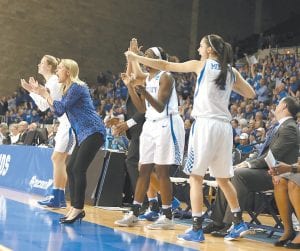 After failing to get to a bowl the last two years despite having great chances to do so each year, University of Kentucky Coach Mark Stoops knows many fans are disgruntled and need to see improvements on the field to believe again in the football program like they did when he first got to UK.

Stoops said the maturity of quarterback Drew Barker, who started games at the end of last season, is one reason to be optimistic.

“I’ve seen a big change in Drew and I want to continue to see that. This is one semester. He needs to have a great summer; he needs to be a great leader in organizing all voluntary workouts and throwing with receivers and running backs and tight ends,” he said. “But I have seen a change. I’ve seen a maturity in him. I’ve seen him much more composed on and off the field. I see a guy who’s very hungry to learn and just settle in and continue to grow.”

But will that be enough to get Kentucky to a bowl game and make fans believe in Stoops again? That’s what I asked four media members who cover Kentucky football regularly.

“I absolutely believe in Mark Stoops. He’s banged his head against a wall trying to build the program back to respectability,” Kentucky Sports Radio football columnist Freddie Maggard, a former UK quarterback, said. “I admire his work ethic and dedication.

“In 2013, UK was talent-depleted. Morale was low coming off an abysmal 2012 season. He’s recruited and sold the program based on blueprints. Now, facilities are concrete structures. By facilities standpoint alone, Mark Stoops has overwhelmingly achieved. Reconstructing a football program in the SEC takes time; he’s on track. As for a bowl game, it’s certainly possible. Schedule is challenging. I can see six wins, yes.”

So does Tom Leach, play-byplay announcer for the UK Network and host of the Leach Report.

“I like Kentucky’s chances of playing in a bowl game because I look for significant improvement on the offensive side and that will take some pressure off a defense that lost some key players,” Leach said. “I understand fans’ frustration about not getting that sixth win the past two seasons but the talent level keeps getting better here. I think fans know that better and more talent is always the path to improvement in any program, so that belief is still there.”

Kentucky Forward columnist Keith Taylor said most of the 10 wins the last two years have not been against SEC opponents, a point of frustration for fans.

“Although the program is making progress, another step is needed for the program to keep climbing the proverbial ladder, especially when it comes to beating SEC teams of the same caliber. I think the fans still believe in Mark Stoops, but anything short of a bowl game would be considered a disappointment to Big Blue Nation,” Taylor said. “I think UK has a shot of becoming bowl eligible if the team can get fully on board and not look back, especially on the offensive side of the ball. A break-even record would be considered a success considering next year’s schedule.”

Lexington Herald-Leader columnist Mark Story has a simple way to break down Kentucky’s chances of success that makes perfect sense to me.

“I think Kentucky’s season may well come down to how many the Cats win from home games against South Carolina, Vanderbilt and Mississippi State. Win all three, UK should be able to get bowl eligible,” Story said. “Don’t win all three, then you are either going to have to beat Georgia in Commonwealth or upset an SEC team (Missouri might be ‘do-able’) or Louisville on the road to get bowl-eligible.

“Because of his contract buyout, I don’t think this is a make-or-break year for Mark Stoops. But it would obviously be helpful in terms of keeping the fan base on board to get past the 5-7 level and make a bowl game.”

Evan Daniels is Scout.com’s national director of recruiting and goes coast to coast — and will even make a trip to Spain this summer — to cover recruiting.

Recently I caught up with him between assignments to ask a few UK-related recruiting questions.

Question: Has it surprised you the number of 2017 offers — and even 2018 offers — that Kentucky coach John Calipari has already made?

Daniels: “Not necessarily, the majority of their 2016 class has been locked up for quite some time, that’s given the Kentucky coaching staff ample time to get a jumpstart on the next two classes.”

Question: What are the odds of a Michael Porter and Trae Young package deal to Kentucky, and how do they compliment each other on the floor?

Daniels: “I think it’s unlikely they end up a package deal anywhere. Is it possible? Certainly. But more often than not these things don’t work out. In terms of their abilities, both of them can really shoot the ball from long distance. Young is crafty and creative, while Porter has terrific size for the position and impressive athleticism.”

Question: How would Jared Vanderbilt fit in the UK system and when do you think he might start narrowing his large, large list of offers?

Daniels: “Vanderbilt is a terrific rebounder and arguably one of the best in the country, regardless of class. He’d fit in UK’s system well, but he can play pretty much anywhere. He plays with a tremendous motor. I think he’ll probably slightly narrow his list soon and get it to a working number. He’ll then examine in throughout the summer and likely take fall visits.”

According to Josh Edwards of CatsPause.com, Calipari told Florida defensive end Jordan Wright that he could join the UK basketball team as a walk-on if he signed to play football with the Cats and Stoops. It is the same offer that Syracuse had already made to the 6-6, 220-pound Wright.

There’s no way to know what impact Calipari’s walk-on offer might have for two high-profile football players, but it does prove he’s all-in trying to help the football program and will continue to do whatever he can to help Stoops. He constantly finds time to meet with recruits who come to UK basketball games and just him being willing to do that and give out walk-on offers like he has sends a positive message about Stoops.

Kentucky football recruiting coordinator Vince Marrow has made Ohio his territory since coming to Kentucky with Stoops. He has helped Stoops develop a pipeline for recruiting in Ohio. However, Marrow is also protective of his territory.

Last week he fired out this not so discreet message on Twitter: “It’s funny some coaches didn’t like recruiting Ohio. Now they are somewhere else and they are all up in it. Let’s battle, go Big Blue.”

Not exactly sure to which former UK assistant that message was directed, but it appeared to be a shot at Alabama assistant Derrick Ansley, UK’s defensive backs coach before he left to join Nick Saban.

Staying with Kentucky football recruiting, what about the message it sends that Green Bay Packers receiver Randall Cobb went through graduation ceremonies Sunday at UK even though he still has to finish two classes this summer to earn his degree.

To make it even more significant, Green Bay quarterback Aaron Rodgers came to Lexington for the ceremony. He posted on Twitter: “Great player, even better guy, now a college graduate. So proud of you brother @rcobb18 #UKgrad #derbyweekend.”

Cobb, who signed a $13 million contract extension last year, is the first person in his family to graduate from college.

Kentucky produced a video where Cobb noted that he wanted to “be successful in as many fields as I can.” He also added again that even though he grew up in Tennessee, just outside of Knoxville, that, “Kentucky made me who I am.”

Kentucky also made freshman basketball player Maci Morris who she is. The Bell County native grew up a Kentucky fan and everyone in her family is a Kentucky fan.

Her freshman teammate, Taylor Murray, is from Odenton, Md. It is a town of almost 40,000 that is west of Annapolis, south of Baltimore and east of Washington, D.C.

“Maci is like one of my best friends. We are roommates. She helps me with a lot of different things and I help her, too. We just help each other, whether it is the classroom or basketball court,” Murray said.

Has she made a trip to Bell County with Morris?

“I went for Thanksgiving and it was really fun just to meet her family and see what her life was like. One day she’s going to come to Maryland and see what that is like,” Murray said. “I was surprised at the lack of size of the town (Middlesboro). There is not much there, but she has a beautiful home. Lot of mountains, but it was a nice, beautiful day.”

Despite their different backgrounds, Murray said the two freshmen bonded instantly. That could be huge for UK going forward as coach Matthew Mitchell tries to restock the roster.

“We played against each other (in AAU) but she didn’t know I was coming to Kentucky at the time,” Murray said. “We just got that bond when you come to college and both of your are freshmen. We just clicked and I enjoy being with her every single day.

“ We are roommates, too. We both have our own rooms. Everything is good. We don’t even fight that often.”